SYDNEY - The Australian Security Intelligence Organisation (ASIO) has identified about 10 political candidates at state and local government elections whom it believes have close ties to Chinese intelligence services.

According to The Australian, these candidates are seen by security officials as a deliberate strategy by Beijing to wield influence through Australian politics.

These details, disclosed in the newspaper's weekend edition on Saturday (Dec 9), have emerged after Australian Prime Minister Malcolm Turnbull unveiled new anti-interference laws on Tuesday (Dec 5) where he expressly referred to concerns about China's influence.

China has insisted it has no plans to interfere in Australian domestic affairs, after Canberra announced laws to curb espionage and ban foreign political donations.

Most of those whom security services identified as having close ties to Chinese intelligence services and the Communist Party were candidates at local government elections, reported The Weekend Australian, but concerns have been raised about state and federal figures as well.

At least one of those candidates is believed to be in elected office today. His relationship with the Chinese security services is alleged to have been cultivated before he was elected.

According to the newspaper, Australian intelligence believes the cultivation of political candidates is part of an orchestrated campaign by Beijing to insert agents of influence into Australian parliaments. The extent of China's influence was described to the newspaper as being "patchy but deep".

The focus in recent months has been on alleged attempts by China to interfere in Australian politics and universities, particularly in in western Sydney, where parties vie for the support of ethnic constituencies. 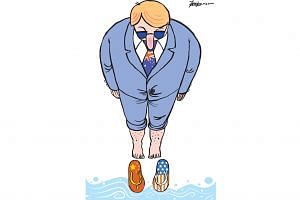 China denies interference in Australia, as Canberra clamps down on spying, donations

In its annual report this year, ASIO said it had "identified foreign powers clandestinely seeking to shape the opinions of members of the Australian public, media organisations and government officials in order to advance their country's own political objectives.

"Ethnic and religious communities in Australia were also the subject of covert influence operations designed to diminish their criticism of foreign governments.

"These activities - undertaken covertly to obscure the role of foreign government - represent a threat to our sovereignty, the integrity of our national institutions and the exercise of our citizens' rights."

Mr Turnbull has stressed that the new anti-interference laws were not aimed at a single country.

"Foreign powers are making unprecedented and increasingly sophisticated attempts to influence the political process, both here and abroad," he said on Tuesday.

Beijing has strongly rejected allegations of its meddling, dismissing them on Wednesday as fabricated news stories which "reflected a typical anti-China hysteria and paranoid (sic)."