ISTANBUL (WASHINGTON POST) - Twenty-four days after a team of Saudi agents killed journalist Jamal Khashoggi at the Saudi consulate in Istanbul, US and Turkish officials are still asking the same question: Where's the body?

The remains of The Washington Post columnist are critical to vetting the shifting accounts of the Saudi government and determining a suitable punishment for the oil-rich monarchy, a key partner in the Trump administration's Middle East policy.

"There has been a declaration that he has been killed, but where is the body?" Erdogan said. "You must show it."

For days, President Donald Trump has also been asking his aides about the body, but Washington remains in the dark about its whereabouts, according to US officials and diplomats familiar with the situation.

Saudi officials said earlier this week that Khashoggi's body had been rolled into a carpet and given to a "local collaborator", but the Turkish authorities say it was dismembered in a grisly operation involving a bone saw and large suitcases.

"Finding the body in whatever form it's in could give credence to Turkey's account," said Amanda Sloat, a Turkey scholar at the Brookings Institution.

"If the body appears in the way the leaks suggest, it gives credence to the premeditated nature of this attack and reflects poorly on the Saudi regime."

On Thursday, Central Intelligence Agency director Gina Haspel briefed Trump about her recent trip to Turkey, where she listened to purported audio of Khashoggi's killing. But even after the meeting, US officials made clear they needed additional information before taking further punitive action.

"We continue to seek all relevant facts in this case," said State Department spokesman Robert Palladino.

"As we learn more we will take additional actions as the facts warrant." A State Department official said Khashoggi's remains "should be located and returned to his family for a proper burial as soon as possible."

In his speech, Erdogan suggested that Turkey has additional "information and documents" about the killing that it would eventually reveal and repeated his call for Saudi Arabia to hand over the 18 people it has arrested in the case if the country's authorities could not "make them talk".

Later in the day, the semi-official Anadolu news agency reported that Turkish prosecutors were set to "demand" the extradition of those suspects.

"Hand them over to us," Erdogan said. "The event took place in Istanbul. We will judge them."

A senior Turkish official said Turkey was requesting the extradition because Khashoggi was murdered by Saudis who travelled to Turkey, and because it was "clear that the judicial system in Turkey is better equipped to genuinely serve the cause of justice in this case". 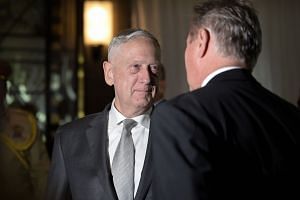 In their own ways, Turkey and the US are pressing Saudi Arabia to provide a credible explanation for a crime that has drawn global condemnation and has prompted countries to reevaluate their ties with the Middle East power.

US and foreign officials say such an operation - involving a team of Saudi agents - was unlikely to have taken place without the knowledge of the kingdom's leaders, including ambitious Crown Prince Mohammed bin Salman.

In the aftermath of Khashoggi's killing inside the Saudi Consulate on Oct 2, Saudi Arabia has offered shifting explanations for what happened, at one point saying Khashoggi had walked out of the rear of the building unharmed and later saying his death resulted from a fistfight.

But on Thursday, the country made its first apparent acknowledgement that the operation was "premeditated". Erdogan on Friday did not mention that development, but instead criticised earlier Saudi accounts as "comical". "These childish statements do not coincide with the seriousness of the state," Erdogan said.

For Erdogan, who has ruled Turkey since 2003, the crime has provided grounds for pushing back against Saudi Arabia, one of its regional rivals, and weakening the credibility of the Crown Prince.

Prince Mohammed this week called the killing a "heinous crime". Both Prince Mohammed and his father, King Salman, have told President Trump and Secretary of State Mike Pompeo, who travelled to Saudi Arabia last week, that they had no knowledge of a plot to kill Khashoggi.

Still, the Trump administration is facing pressure to take action against the kingdom, even though an alliance with the Saudis has been a pillar of its strategy in the Middle East to counter Iran. Trump has called Khashoggi's murder "one of the worst cover-ups in the history of cover-ups".

In its statement on Thursday, Riyadh said it had learnt from Turkish officials that the suspects in Khashoggi's killing had "committed their act with a premeditated intention". The Saudi news statement, attributed to its public prosecutor, was significant because it relayed Turkey's conclusion, but it did not make clear whether Saudi investigators had reached that same conclusion on their own.

Pompeo, speaking during an interview on Friday with conservative radio host Hugh Hewitt, said: "Saudi prosecutors yesterday made clear that this was a premeditated murder that took place, and we're continuing to learn the facts."

Khashoggi was visiting the Saudi Consulate in Istanbul to obtain documentation that would allow him to marry his Turkish fiancee, Hatice Cengiz.

He was a royal court insider who had become critical of the Saudi government, and he was living in exile in Virginia, in part because of the nation's diminished speech freedoms and its crackdown on dissent.

Khashoggi and Cengiz had recently furnished an apartment for themselves in Istanbul. In an interview with Turkish broadcaster Haberturk that aired on Friday, Cengiz said Khashoggi was treated well during an earlier trip to the consulate on Sept 28.

He still had concerns, but "he thought Turkey is a safe country, and if he would be held or interrogated, this issue would be swiftly solved", Cengiz said, according to an account of the interview translated by Reuters.

Salah Khashoggi, the eldest son of Jamal Khashoggi, arrived in the US on Thursday after departing Saudi Arabia, one person close to the family said.

Salah is a dual US-Saudi citizen who had previously been restricted from leaving and who was photographed earlier this week meeting King Salman and Prince Mohammed and receiving their condolences. All four of Khashoggi's children are now in the US.