BEIRUT (NYTIMES) - More than two weeks after dissident Saudi journalist Jamal Khashoggi was killed inside the Saudi Consulate in Istanbul, his government has finally laid out its narrative of what happened.

United States President Donald Trump appears to be giving the Saudis the benefit of the doubt, but many others, including friends of Mr Khashoggi, and Turkish and US officials, aren't buying it.

What happened to Mr Khashoggi on Oct 2 remains open for debate, in part because of how details have become public.

Turkey's leaders have largely refrained from publicly accusing the Saudis, but the country's security officials have leaked a stream of details that reflect a grisly murder.

In their telling, doled out in anonymous statements to the news media, Mr Khashoggi was killed and dismembered inside the consulate by a 15-man team sent from Riyadh for that very purpose.

Saudi Arabia's new account suggests that those men sought to bring Mr Khashoggi back to his home country, but when he resisted, a fight broke out and he was put in a deadly chokehold. Many of the details in the Saudi story were also provided anonymously.

So how do the competing narratives stack up? Here are some questions the storylines raise. 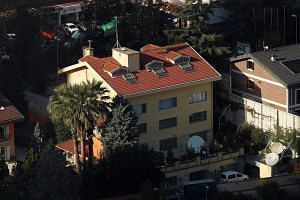 Crown Prince's fate may be in the balance

WHERE IS THE BODY?

Nobody seems to know.

The Turks have said Mr Khashoggi's body was cut up by an autopsy specialist with a bone saw before being carried out of the consulate in large suitcases and disposed of in an unknown location, perhaps a forest.

A Saudi official, however, said the team handed over Mr Khashoggi's body to a local "collaborator" to dispose. The official, who spoke on the condition of anonymity, did not disclose the person's nationality, a detail the team could seemingly provide easily.

Some have speculated that the introduction of this unknown person could allow the Saudis to duck responsibility for the state of Mr Khashoggi's corpse if and when it is found. The Saudis could argue they weren't involved.

Turkish officials said on Saturday (Oct 20) that they expected to find the body soon.

WHAT IS THE EVIDENCE?

Little concrete evidence has been made public by either side, although the Turks have provided much more detail to back up their narrative than the Saudis have.

The Turkish information included names of members of the Saudi team and photos of them at the airport, in their hotels and near the consulate. Many of the men have ties to the Saudi military and security services.

The New York Times was able to corroborate the identities of most of the men and to establish that at least four had frequently travelled abroad with the country's de facto ruler, Crown Prince Mohammed bin Salman, as part of his security detail.

They included General Maher Abdulaziz Mutreb, an intelligence officer who had been photographed near the crown prince during visits to Paris, Madrid, Houston, Boston and the United Nations.

Another suspect, Mr Salah al-Tubaigy, is a renowned Saudi autopsy specialist with ties to the security forces.

The Saudi official confirmed that both were part of the 15-man team, but said Mr al-Tubaigy was tapped not for his expertise in dealing with dead bodies, but rather for his experience in forensics and his skill in removing evidence from crime scenes.

The Saudi official said the Turks had mostly succeeded in identifying the members of the team, although there had been some mistakes he attributed to name spellings. He did not provide the identities of the rest of the team.

WHY DID THE SAUDIS TAKE SO LONG TO PUT OUT THEIR STORY?

In the days after Mr Khashoggi went missing, Saudi officials repeatedly denied any knowledge of his whereabouts and said he had left the consulate.

A summary of the timeline:

- Oct 5: Crown Prince Mohammed told journalists from Bloomberg that Khashoggi had left the consulate after "a few minutes or one hour".

- Oct 6: The Saudi consul walked reporters from Reuters around the consulate, letting them peek in cupboards, air-conditioning units and toilets to show that Mr Khashoggi was not there. "We are worried about this case," the consul said.

- Oct 9: Saudi ambassador to the United States Khalid bin Salman, wrote that reports of Mr Khashoggi being detained or killed were "absolutely false, and baseless".

It was not until Saturday - 18 days after Mr Khashoggi went missing - that the Saudis acknowledged he had been killed inside the consulate by Saudi agents.

Seeking to explain the delay, the Saudi official said the team members had tried to cover up Mr Khashoggi's killing for fear they would get in trouble.

It was only after Turkish officials suggested he had been killed that their superiors investigated and learnt of the killing.

Why the team had not been required to report the mission's outcome to its superiors remains unclear.

WHAT ABOUT THE BONE SAW?

Before Mr al-Tubaigy was publicly identified, Turkish officials said that someone with his expertise was part of the Saudi team and that the person had entered the country with a bone saw, a common implement in autopsies.

Mr al-Tubaigy used the saw to dismember Mr Khashoggi's corpse while listening to music and encouraging his colleagues to do the same, Turkish officials said when they released details from a purported audio recording.

Not true, said the Saudis.

"There was absolutely no bone saw," the Saudi official said. Mr al-Tubaigy had been on hand in case evidence like fingerprints needed to be removed, the official said.

IS THERE A RECORDING OF THE KILLING?

It is still unclear.

Turkish officials have suggested at various points that they had both video and audio of Mr Khashoggi's killing.

Now, the Turks say they have audio, the source of some of the more lurid details they have given about the killing. But they have not made the audio public nor shared it with the intelligence agencies of other countries, like the United States.

That could be for a variety of reasons: because it doesn't exist; because the Turks consider it the ultimate trump card to quash the Saudi narrative; or because they don't want to acknowledge they had bugged the Saudi consulate. That would be a violation of diplomatic protocol and could embarrass Turkey.

DID THE SAUDI CROWN PRINCE ORDER A KILLING?

Saudi Arabia denies that its leaders ordered the operation against Mr Khashoggi or even knew it had taken place until days later.

The kingdom's intelligence service had a general order to bring dissidents home, according to the Saudi official, but the directive in Mr Khashoggi's case grew more aggressive as it made its way down the chain of command.

But many Turkish and US officials doubt that such an elaborate operation could have been orchestrated without the knowledge of Crown Prince Mohammed, who has consolidated considerable power.

The operation involved two private jets from a company linked to the Saudi royal family, and a number of the 15 men named as suspects had close ties to the crown prince.

"It's impossible that a crime would take place in any country's consulate - especially, according to allegations, one committed by public workers - without the knowledge of that country's officials," said Mr Numan Kurtulmus, the acting chairman of Turkey's governing Justice and Development Party.

WHERE DOES THE INVESTIGATION GO FROM HERE?

Both Turkey and Saudi Arabia have vowed to keep searching until the truth is revealed, although it is unclear how long that will take and if their duelling narratives will eventually converge.

"We will not allow things to remain covered," said Mr Omer Celik, a spokesman for Turkey's governing party. "We will use all the opportunities that we have to reveal what happened, and this is the intention of our president."

Saudi Arabia's public prosecutor said on Saturday that the kingdom's inquiry would continue in order to "uncover and announce all the facts and to hold accountable all those involved in this case and bring them to justice".

But there are few examples of Saudi Arabian authorities investigating themselves and holding leaders from the powerful royal family accountable.