ISTANBUL - Saudi Arabia said on Saturday (Oct 20) that dissident Saudi journalist Jamal Khashoggi, who disappeared more than two weeks ago, died after an argument and fist fight with unidentified men inside the Saudi consulate in Istanbul.

Here is a timeline of the developments in the case:

Oct 2: Mr Khashoggi enters the Saudi consulate in Istanbul to get papers required for his upcoming marriage. He hasn't been seen since. His fiancee, Hatice Cengiz, who was waiting outside for him, notifies the police after he doesn't come out.

Oct 4: The consulate says Mr Khashoggi left the building and it has no idea about his whereabouts. However, Turkish officials say they believe the columnist is still inside the building.

Oct 6: Turkish officials say they believe the columnist was killed inside the consulate, before being moved elsewhere.

Oct 9: Turkish officials announce that they will search the consulate after Saudi officials indicate that they are willing to cooperate.

Oct 10: US President Donald Trump wades into the case, saying he has spoken to the Saudi authorities and that the US is working closely with Turkey. His remarks come as Turkish media releases images of what they call an "assassination squad" entering the country.

Oct 11: Mr Trump tells the Fox & Friends news show that his administration was taking the case seriously, but that he did not want to limit arms sales worth billions of dollars to Saudi Arabia in response. 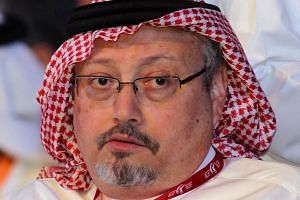 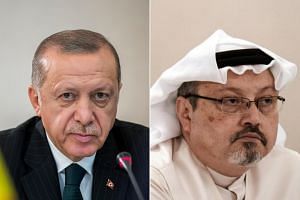 Oct 13: A Turkish newspaper reports that Mr Khashoggi's torture and killing were recorded on his Apple Watch, which had transmitted the data to an iPhone he had given to his fiancee before entering the consulate.

Oct 14: Saudi Arabia warns against any sanctions being imposed against it over the case, threatening to respond even more forcefully after Mr Trump said on 60 Minutes that there would be "severe" consequences if Saudi Arabia was found to be involved in Mr Khashoggi's disappearance. As the rhetoric escalates, top businesses begin to withdraw from the Davos in the Desert summit, which is intended to attract foreign investment to Saudi Arabia.

Oct 15: Turkish sleuths search the consulate. Meanwhile, Mr Trump floats a theory that the people involved in Mr Khashoggi's disappearance may have been "rogue killers".

Oct 16: Mr Trump hits out at the widespread outrage directed at Saudi Arabia, insisting that the country was being judged "guilty until proven innocent". He also reiterates Saudi denials of involvement on Twitter.

Oct 17: A Turkish team searches the home of the Saudi consul. After the search ends, a news report emerges that contains details from a purported recording of Mr Khashoggi being tortured and then decapitated.

Oct 18: Mr Trump says it "certainly looks" like Mr Khashoggi is dead and once again threatens "very severe" consequences if the Saudis are found to have murdered him.

Oct 19: Saudi television says that a preliminary investigation has found that Mr Khashoggi was killed during a fist fight at the Saudi consulate. The country's intelligence chief is sacked and so is an adviser to Crown Prince Mohammed bin Salman. Eighteen people are also detained. Mr Trump says he finds the Saudi statement credible and will be speaking to the crown prince.