The election is being held for the Negeri Sembilan parliamentary ward after its MP, who held the position for just four months, stepped down voluntarily to allow the incoming president of Parti Keadilan Rakyat (PKR) Anwar Ibrahim to contest.

Datuk Seri Anwar, 71, is keen to become an MP ahead of a succession plan agreed upon by the ruling Pakatan Harapan (PH) alliance to make him prime minister after Tun Dr Mahathir Mohamad.

Dr Mahathir is set to pass the premiership to Mr Anwar after around two years following the PH victory in the May general election.

Umno has said it is boycotting the by-election in Port Dickson, dubbed "PD" by most Malaysians, to protest against a wastage of government funds at what it sees as an unnecessary vote.

PKR has held the seat in the last three general elections.

Mr Isa, 68, who was Negeri Sembilan's menteri besar for 22 years, said he decided to contest as he was a "PD boy". 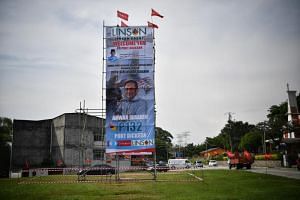 "I decided to stand as an independent because the seat is vacant. The other reason is because Umno has decided against contesting," he said.

Mr Isa had served as Linggi state assemblyman for five terms. And he also won the Bagan Pinang state seat in a by-election in 2009.

Both seats are under the Port Dickson parliamentary constituency.

Mr Isa was also the former Teluk Kemang Umno chief. He said he has a good chance of winning as he had served the people there for a long time.

Prior to a redrawing of constituency boundaries before the May 9 general election, the Port Dickson seat was known as Teluk Kemang.

Mr Isa is a controversial Umno leader who was found guilty of bribing voters in the party's internal polls in 2004. He was suspended from Umno for six years between 2005 and 2011.

He was made chairman of government agency Federal Land Development Authority (Felda) for six years from 2011, with allegations of financial misappropriation.

The fight for the Port Dickson seat could turn out to be a five-way contest, if three other candidates were to join in as announced earlier.

Parti Islam SeMalaysia on Thursday (Sept 27) evening announced retired Lieutenant-Colonel of the Royal Malaysian Air Force, Mohd Nazari Mokhtar, as its candidate. Two other possible candidates are the small Parti Rakyat Malaysia and another person who plans to run as an independent.

There was also speculation that former Selangor menteri besar and a former PKR treasurer, Khalid Ibrahim, might throw his hat into the ring.

Nomination day is set for Saturday (Sept 29) and voting on Oct 13.