In a statement, Chan said his fight was not about any individual candidate or party, but against an entitled political leadership that is insensitive to the mood of the people.

Chan said the forced by-election in Port Dickson to allow Parti Keadilan Rakyat (PKR) president-elect Anwar Ibrahim to make a comeback in Parliament was against the spirit of the nation's democratic process.

"As a matter of principle, we shouldn't condone the action of elected representatives taking for granted the mandate voters have given them," he said.

"The slippery slope with us accepting this may lead to future candidates being pointless placeholders for political manoeuvring, thus, defeating the very idea of elected representation."

Chan said the timing for the by-election was inappropriate, claiming that people wanted to see their elected officials move forward with the reform agenda and solve problems.

According to him, the by-election for Port Dickson, also known as "Langkah PD" (PD move), distracted politicians from their role in serving the people. 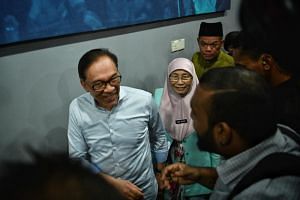 He said the nature of the forced by-election, the seat chosen, the timing and the statements made all indicated a leadership that was insensitive to the mood of the people.

"My enemy now is political entitlement and arrogance - represented by Langkah PD - which may see Barisan 2.0 emerge, if Langkah PD was condoned and supported," Chan said referring to the Barisan Nasional (BN) coalition which was toppled by the Pakatan Harapan (PH) pact at the May election. The PKR is one of the component parties of the PH alliance.

He added that there was no need to have the by-election, as Datuk Seri Anwar was a already free man. Moreover, Prime Minister Mahathir Mohamad had agreed to hand over power to him in two years.

Chan also questioned Anwar's professed intention of wanting to focus on parliamentary reforms. He said such reforms could be addressed by the other PKR MPs, including his wife, Deputy Prime Minister Wan Azizah Wan Ismail, and his daughter, Permatang Pauh MP Nurul Izzah Anwar.

He said even if there was a necessity for Anwar to return to Parliament, the most appropriate seat to make way for his return would be the ones held by his wife or daughter.

"This is not just because Datuk Seri Wan Azizah had clearly stated she didn't mind giving way to her husband in a 2017 interview with Al-Jazeera, but also the potential issue of nepotism and concentration of power within one family," he added.

Chan said the reluctance of the opposition to contest was also a "cause for alarm against the values and spirit" that the people voted for on May 9.

The Election Commission has set Sept 29 for nomination day and Oct 13 for polling day.

The parliamentary seat in Negri Sembilan was vacated by PKR MP Danyal Balagopal Abdullah, after he resigned on Sept 12 to make way for Anwar.

In GE14, Danyal won the seat with a majority of 17,710 votes against BN's Datuk V.S Mogan and Mahfuz Roslan of Parti Islam SeMalaysia.