HONG KONG - About a hundred protesters gathered outside the Kwai Chung Police Station in Hong Kong on Tuesday (July 30) night calling for the release of their comrades, many of whom were being held in Kwai Chung.

Hong Kong police issued a statement that 44 protesters detained during violent clashes on Sunday would be charged with rioting, which carries a sentence of up to 10 years in jail.

The protesters later dispersed after the final seven were released on bail.

Earlier in the day, railway services resumed normal operation after dozens of protesters tried to prevent trains from leaving platforms.

Service on the Kwun Tong Line between Tiu Keng Leng and Kwun Tong stations were suspended at about 8.35am after protesters, some clad in black and wearing masks, turned up at Tiu Keng Leng Station in Sai Kung at 7.50am to block the doors of a Whampoa-bound train with their hands, bodies or items as passengers expressed their annoyance at the disruption to their morning commute.

A train was held up for more than half an hour, RTHK reported.

Meanwhile, dozens of mostly young protesters gathered at the arrival hall of Hong Kong’s busy airport at around 4.30pm with the goal of spreading their message to foreigners visiting the city.

At the airport, protesters pasted signs on their back with protest slogans and graphics explaining the recent police violence in Hong Kong in a more muted repeat of last Friday’s sit-in.

Student Shirley Luk, 17, was acting as a walking Lennon Wall, a mobile version of the ubiquitous post-it walls that have sprouted up across Hong Kong where people put up messages of support on sticky notes.

She said the gathering was almost spontaneous. “We felt that since the government hasn’t responded after so long, we’ll just come out to tell visitors about what is happening in Hong Kong,” she said.

She added that since there was  no protest permit, unlike the previous week, they were not allowed to hold up banners and signs, or paste anything on the airport’s walls. Instead, protesters duct taped signs to their own body.

Most of the protesters later dispersed from arrival hall A and were walking around after being told twice by airport authorities they should not block the prime waiting area.

At the train station, tempers flared and police were called but no arrests were made. In one train carriage, some commuters got into heated arguments with the protesters.

“It’s so inconvenient and annoying, really. I am in a hurry (to get) to work, to make a living. Will you give away your salary to me?” said a 64-year-old man surnamed Liu.

Sharon, a 21-year-old masked protester who declined to give her full name, told Reuters: “We don’t know how long we are going to stay here, we don’t have a leader, as you can see this is a mass movement now.”

“It’s not our intention to inconvenience people, but we have to make the authorities understand why we protest. We will continue with this as long as needed.”

Others chanted, “Liberate Hong Kong,” and “Revolution of our Time”.

At about 11.30am, dozens of protesters who were disrupting passengers at North Point Station decided to move to Hung Hom Station on the West Rail Line.

Train service on the Kwun Tong Line and Island Line finally started to reopen around 11am.

Another commuter Katie Leung, 42, who lives in Tseung Kwan O, told The Straits Times: “I knew they were gathering but I was hoping it wouldn’t escalate too much, but in the end, it was a huge mess. I had to take a bus to work instead and was nearly two hours late.

“I understand why the protesters are doing this but you really shouldn’t inconvenience people who are trying to get to work. We want to support the cause as much as possible but this is very disruptive.”

Others, like Mr Leonie Lam, were more understanding. “It’s quite inconvenient but when the government isn’t listening to the people, this is what we’re forced to do. I told my boss I would be late for work,” said the 25-year-old.

“Of course I feel bad for those people who work on shifts, but we each need to do our part to push for change in Hong Kong,” he added.

Secretary for Transport and Housing Frank Chan told the media that if the protesters want to demonstrate, they should do so in a peaceful and rational manner.

He said the demonstrators should not compromise the safety of the other passengers and that the MTR staff and police are doing their best to ease passenger traffic.

“I believe we respect the moves of the protesters if they express their views in a peaceful and rational manner, and not inconvenience others. Every day, there are more than five million passengers who use the train services to get to work or other destinations.

“I hope those who are expressing their views can consider  those who have to go to work or other travel  and try not to disrupt the train services during the rush hour because it causes a lot of inconvenience and possible safety issues,” he said.

A similar campaign was carried out last Wednesday at Admiralty station, also during morning rush hour, causing train delays of as long as 18 minutes.

Protesters were angry at Beijing’s warning on Monday that “if Hong Kong continues to be chaotic, the whole society will have to pay the price”.

The Hong Kong and Macau Affairs Office (HKMAO) under China’s State Council accused those who had attacked government offices of “evil and criminal acts”, and said these “horrendous incidents” had caused serious damage to the city’s rule of law, economy and its international image.

It was the first such briefing in Beijing and was seen as an attempt by China to make its official position over the worsening political crisis in Hong Kong known.

He added that the Chinese government will work with the Hong Kong authorities in finding solutions. 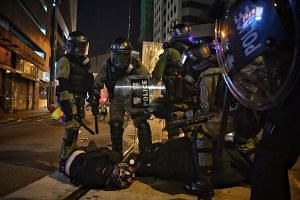 Hong Kong protests: What's fuelling the unrest and ways to deal with it

Protest organisers rejected his remarks, calling the press conference a “waste of time”. Instead, the organisers repeated calls for Chief Executive Carrie Lam to set up an independent commission to look into allegations of police brutality during clashes with the protesters.

On Monday night, some protesters had discussed on social media about organising another sit-in at the airport.

They also talked about blocking major roads in the city, including Nathan Road, Gloucester Road and the Island Eastern Corridor, during morning rush hour. They planned to stop their cars in the middle of the road and pretend their vehicles had broken down, South China Morning Post reported.

There were also fears that rail workers would stage a strike on Tuesday after some MTR staff said on a discussion forum on Monday night that they would call a strike to express their dissatisfaction with the management’s handling of the July 21 attacks at Yuen Long station.

On July 21, a group of white-shirted men armed with sticks and metal bars beat commuters at Yuen Long station, including those returning from a protest in the city centre. More than 40 people were injured in the incident.

Civil servants plan to hold an assembly on Friday night, with organisers saying it is aimed at mending the rift between the government and citizens.

Millions have taken part in street protests for the past two months against a now-suspended extradition Bill that would have allowed criminal suspects in Hong Kong to be sent to China to face trial. Protesters said that the legal system in China is not transparent and fear that extradited suspects would not get a fair trial there. They also think the extradition Bill violates the “one country, two systems” arrangement for Hong Kong after the British handover in 1997.

Fierce clashes between protesters and police broke out last Saturday and Sunday for the eighth consecutive weekend as the demonstrations grew increasingly violent.

What began as a movement to oppose the extradition law has taken on broader demands. They include the resignation of Mrs Lam, calls for full democracy and an independent inquiry into what some say has been excessive police force against protesters.