ISTANBUL (REUTERS) - The fiancee of murdered Saudi journalist Jamal Khashoggi said on Friday (Feb 8) she would welcome a change in Donald Trump's approach to the killing, and may visit the United States in March, having previously rejected an invitation from the President.

Khashoggi, a royal insider who became a critic of Saudi Arabia's Crown Prince Mohammed bin Salman, was killed inside the Saudi consulate in Istanbul by a team of Saudi operatives on Oct 2, provoking international revulsion.

Trump has resisted efforts in the US Congress to rebuke the Saudis, pointing to weapons sales as an important source of US jobs. His administration is also reluctant to disturb the strategic relationship with the kingdom, seen as an important regional counterbalance to Iran, arch-rival of US ally Israel.

"I might visit America in March," Khashoggi's fiancee Hatice Cengiz told a news conference to mark the release of her book on Khashoggi. "I would welcome it if he (Trump) has a new approach on following this issue closely, or new actions to take." Trump previously invited Cengiz to the United States but she said she had rejected the invitation as she thought it was aimed at influencing public opinion in his own favour.

Earlier on Friday, an aide to President Tayyip Erdogan said Saudi officials' "complete lack of transparency" on the murder investigation is deeply concerning and detrimental to their credibility.

"Over the past four months, the Saudi authorities have been less than forthcoming in their dealings with their Turkish counterparts and the international community," said Fahrettin Altun, Erdogan's communications director.

"Saudi authorities must extradite Mr. Khashoggi's killers to Turkey, where they committed a premeditated murder, as proof of their willingness to serve the cause of justice," he said in a written statement to Reuters. 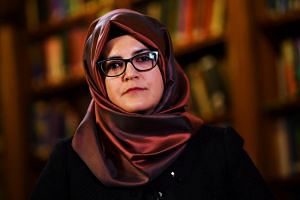 Khashoggi fiancee: Riyadh responsible for his murder, must explain

After making numerous contradictory statements about Khashoggi's fate, Riyadh said he had been killed and his body dismembered when negotiations to persuade him to return to Saudi Arabia failed.

Republican and Democratic US lawmakers renewed their push on Thursday to penalise Saudi Arabia for the murder ahead of Friday's deadline for Trump's administration to submit a report on whether the crown prince ordered the killing.

"The Congress is renewed, the members are changed. I am hopeful. There is still hope. I believe the new Congress would follow this issue closer," Cengiz said. Democrats now control the US House of Representatives.

Cengiz, a Turkish researcher, had waited outside the Istanbul consulate for hours on the day Khashoggi was killed and alerted the authorities and media when he did not leave.

Saudi Arabia has previously denied Turkey's extradition request for the 11 suspects, five of whom are facing the death penalty in Saudi Arabia.

Erdogan has said Khashoggi's killing was ordered by the highest level of Saudi leadership. Riyadh has rejected accusations that the crown prince was involved.

On Thursday, a United Nations-led inquiry into the murder said evidence pointed to a brutal crime "planned and perpetrated" by Saudi officials, adding that Saudi officials had "seriously undermined" and delayed Turkey's investigation.

"I wish this report will accelerate the process so that more concrete things will be done on this situation," Cengiz said. "I believe the UN report would have an international impact.

Altun said Turkey's findings on the case were in line with those of the UN-led inquiry, adding that Ankara was committed to cooperating in a potential UN investigation into the case.

Despite Turkey's joint investigation with Saudi officials looking at the kingdom's consulate in Istanbul, the consul's residence and several other locations, the whereabouts of Khashoggi's remains are still unknown.

Khashoggi's killing has severely strained ties between Turkey and Saudi Arabia, although Erdogan has good ties with the Saudi monarch, King Salman.

In an interview with Turkey's state broadcaster on Sunday, Erdogan said both the crown prince and Saudi's Adel al-Jubeir had lied about the case and pressure from Turkey had led to Jubeir being removed from his post as foreign minister in December.