SINGAPORE - Extra precautions are usually taken by physiotherapists when they treat female patients, including having a woman chaperone in the room.

And if clothing has to be removed for treatment, patient consent is required and a gown could be provided, said physiotherapists interviewed by The Straits Times.

The professional conduct demanded of physiotherapists in Singapore was put under the spotlight after a physiotherapist was sentenced to 11 months' jail and three strokes of the cane last Wednesday for molesting a female patient during treatment.

Luke Manimaran Degarajoo, 43, was found guilty of molesting an 18-year-old twice after rolling down her underwear and shorts during the massage. During the session, the victim's friend waited outside while the door was half shut at the Rehab Physio Practice in Delfi Orchard.

There are more than 1,700 registered physiotherapists in Singapore. Their work involves "the prevention, assessment and treatment of disorders of human movement due to physical disabilities, trauma or illness" based on the Ministry of Health website.

Mr Joseph Wong, a physiotherapist at Orchard Physiotherapy Centre, said that when treating a female patient, a woman chaperone - such as a nurse or therapy assistant - is usually present during the session. This is especially if the treatment concerns sensitive areas, such as near the breasts or genital areas.

"It's also important to explain to the patient what the treatment will include, to avoid misunderstandings," said the 61-year-old, adding that if the patient requests a female physiotherapist, he will usually direct them to somebody else.

Mr David Aw, who owns Emmanuel Physiotherapy, said that when he is treating younger patients, he will usually encourage the patient's parents or relatives to sit in on the session. Some teenagers bring a friend or significant other along to sessions instead, which he said is also "perfectly fine". 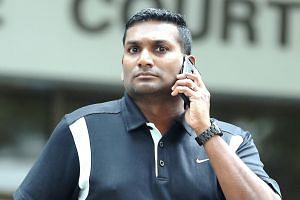 "The patient will feel more comfortable, and it's good to have a parent or friend around so we can explain what we're doing to them," he said.

"Essentially, what's important is for the physiotherapist to behave professionally, whether the patient is male or female, old or young."

And while the removal of clothing might be necessary in some cases - for example, in ultrasound scans and manual therapy such as massages - the patient's consent still takes precedence, said Mr Jonathan Lim, 43, a physiotherapist at Physio & Therapy Lodge Group Pte Ltd.

"Sometimes it's necessary for some clothing to be removed," he said. "But I first ask them whether they are comfortable doing so."

Clothing may be removed in order to reduce friction, retain the sensitivity of hands and monitor the reaction of the skin. It is especially common in muscoskeletal physiotherapy.

Mr Aw said that in Singapore, patients are usually provided with a gown if they are required to undress, which can be rolled up or down if necessary.

"In Australia or America, some clinics might get patients to sit in their underwear because it's more open there. But here in Singapore, a lot of us work through the clothing - it's not ideal, but we want to protect ourselves and make sure the patient doesn't feel compromised," said the 52-year-old, who has been practicing for 30 years.

Physiotherapy regulars whom the Straits Times spoke to said that while they have not encountered any incidents in which they felt that their modesty was being compromised, they would not hesitate to speak up if faced with such a situation.

Ms Celine Go, a former national gymnast, said that in her experience, she has never needed to completely undress during a physiotherapy session.

She added that in cases where pieces of clothing had to be removed or rolled down, a chaperone was usually invited into the room.

"Permission for such actions should always be asked from patients first," said the 18-year-old, adding that if she felt "exposed", she would ask for a towel to cover the area.

The former Olympic windsurfer reaffirmed how she was never asked to remove her undergarments and would only ever be required to remove her shirt for ultrasound scans or sports massages, with her permission.

"Even then, it was always a choice and I could stop the treatment if I felt uncomfortable at any point," she added.

Other allied health professionals include occupational therapists and radiographers.

Said a MOH spokesman: "All registered allied health professionals are expected to always maintain high standards of personal conduct and behaviour, and abide by all laws and regulations governing their practice and the code of ethics of the profession and the Council."

Any breach in such laws and regulations are also to be reported to the Council, added the spokesperson.

The Council is able to conduct preliminary investigations into certain types of complaints, such as those that involve improper conduct of an allied health professional. It has the option to take steps such as issuing a warning letter to the professional in question.