WASHINGTON (AFP) - Similarities between the Lion Air and Ethiopian Airlines crashes, confirmed by black box data, have focused attention on an anti-stalling system used in the new Boeing 737 Max 8 aircraft.

The Manoeuvring Characteristics Augmentation System (MCAS) is an automated safety feature on the 737 Max 8 designed to prevent the plane from entering into a stall, or losing lift.

Both the Lion Air jet, which crashed in October, killing 189 people, and the Ethiopian Airlines aircraft, which went down on March 10, leaving 157 people dead, were fitted with the system.

A malfunction of the system was implicated in the Lion Air accident in Indonesia.

The United States Federal Aviation Administration (FAA) said findings from the crash site and "newly refined satellite data" warranted "further investigation of the possibility of a shared cause for the two incidents".

The 737 Max 8 and 9 have been grounded worldwide since the Ethiopia crash, and last Friday, industry sources said Boeing plans to upgrade the MCAS system in the "coming weeks". 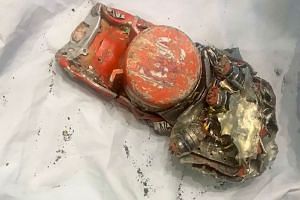 MCAS was introduced by Boeing on the 737 Max 8 because its heavier, more fuel-efficient engines changed the aerodynamic qualities of the workhorse aircraft and can cause the plane's nose to pitch up in certain conditions during manual flight.

Angle of attack sensors on the aircraft tell the MCAS to automatically point the nose of the plane down if it is in danger of going into a stall.

This is done through horizontal stabilizers on the plane's tail which are activated by the aircraft's flight control computer.

According to Boeing, MCAS does not control the plane during normal flight but "improves the behavior of the airplane" during "non-normal" situations.

These could be steep turns or after take-off when a plane is climbing with flaps up at speeds that are close to stall speed.

According to the flight data recorder, the pilots of Lion Air Flight 610 struggled to control the aircraft, as the automated MCAS system repeatedly pushed the plane's nose down following take-off.

The pilots of the Ethiopian Airlines plane reported similar difficulty before the aircraft plunged into the ground shortly after take-off.

A preliminary report on the Lion Air Flight 610 accident blamed it in part on a faulty angle of attack sensor that triggered the MCAS system and automatically forced the plane's nose down. 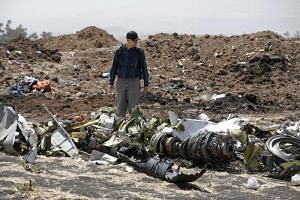 Boeing came in for some criticism after the Lion Air crash for allegedly failing to adequately inform 737 pilots about the functioning of MCAS or provide training about the system.

Following the Lion Air crash, Boeing issued a bulletin to airlines operating the 737 Max 8 advising pilots how to override the MCAS system.

The US aircraft manufacturer issued a statement on Monday saying it was too early to understand the cause of the Ethiopian Airlines accident.

Boeing also said it was working on software updates to the MCAS system which would be deployed across the 737 Max fleet.

It said procedures already exist to "safely handle the unlikely event of erroneous data coming from an angle of attack (AOA) sensor", the suspected cause of the Lion Air crash.

"The pilot will always be able to override the flight control law (MCAS) using electric trim or manual trim," the aircraft manufacturer said.

Boeing has described the Max series as its fastest-selling family of planes, with more than 5,000 orders placed to date from about 100 customers.

But not since the 1970s - when the McDonnell Douglas DC-10 suffered successive fatal incidents - has a new model been involved in two deadly accidents in such a short period.