NEW YORK (NYTIMES) - US and Canadian regulators cited newly available satellite-tracking data in grounding all Boeing 737 Max jets on Wednesday (March 13), saying there were similarities between the deadly crash involving the plane in Ethiopia on Sunday and an Indonesian flight in October.

The causes of both crashes are still under investigation. But the data cited by regulators points to preliminary indications that the two planes could have been brought down by the same cause, a malfunctioning automated system intended to keep the jet from stalling.

Marc Garneau, Canada's transport minister, said Wednesday that the satellite-tracking data revealed "vertical variations" in the Ethiopian Airlines flight reminiscent of those seen before the crash of the Lion Air Boeing 737 Max in Indonesia in October.

The investigation of the Ethiopian crash is still in its early stages, and the full data cited by authorities has not been publicly released. Many experts cautioned that any conclusions are far from certain and don't rule out other possibilities, such as pilot error or another malfunctioning system.

But aviation experts who reviewed the patterns in publicly available data said it suggests that the newly installed automated system known as MCAS may have been activated on the Ethiopian flight and could have contributed to the crash.

Many experts believe that during the first crash, the Indonesian pilots lost their battle with MCAS.

Possibly because of faulty sensor readings, the automated system pushed the nose of the Lion Air plane down. The pilots repeatedly counteracted it and pulled the nose back up, only to be overridden by the system again. Each interval took about 15 to 20 seconds, leaving a repetitive signature on the data for the plane's vertical speed.

That led to the series of variations of altitude until the pilots crashed.

The public data for the Ethiopian flight is less clear and complete, but it appears to show a similar signature - an interval where the plane was gaining altitude and then leveling out. 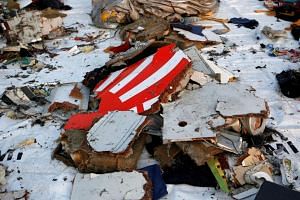 The Canadian transport minister said that based on satellite data he had reviewed, MCAS may have played a role.

The oscillation of roughly 15 to 20 seconds is a telltale sign that suggests the MCAS system may have been involved, said R. John Hansman Jr., a professor of aeronautics and astronautics at the Massachusetts Institute of Technology.

Planes like the Boeing 737 oscillate naturally, he said, because of turbulence and other effects. But those swings have different time spans: either between five and eight seconds, or a minute or longer. The variations in the intermediate range of 15 or so seconds have no other obvious explanation, he said.

"Even from the available data, there are similarities between the Lion Air case and this case in terms of this 15-second periodicity. That would point toward a similar phenomenon. We'll know more when we get the flight data recorder," Hansman said.

Don Thoma, chief executive of Aireon, the company that provided the new data, said that it "certainly showed something was wrong with the aircraft, and something they should take a hard look at."