NAIROBI (BLOOMBERG, REUTERS) - The Ethiopian Air Boeing 737 Max crash had similarities to the Lion Air plane that went down off the coast of Indonesia about five months ago, the nation’s transport minister said, as scrutiny of one of the aircraft’s flight control systems continued to build.

A preliminary study of the flight data recorders show “clear similarities between Ethiopian Airlines flight 302 and Indonesian Lion Air Flight 610”, Dagmawit Moges said Sunday (March 17) at a press conference in Addis Ababa. The findings will be subject to further investigation, and a preliminary report will be released within 30 days, she said.

The Ethiopian Airlines plane crashed March 10 minutes after it took off from Ethiopia’s capital, killing all 157 people on board.

The accident prompted most of the world to ground Boeing Co.’s 737 Max 8 aircraft on safety concerns. Much of the attention focused on a specific flight-control system that may have thwarted pilots’ efforts to keep the plane from falling into a catastrophic nose dive.

In one of the most detailed descriptions yet of the relationship between Boeing and the Federal Aviation Administration during the 737 Max’s certification process, the Seattle Times reported Sunday that the US regulator delegated much of the safety assessment to Boeing and that the analysis the planemaker in turn delivered to the authorities had crucial flaws.

The newspaper’s report was based on interviews with current and former engineers directly involved or familiar with the evaluations, all of whom asked not to be identified, and was underway even before the Ethiopia crash.

Boeing told the newspaper Saturday that the FAA had reviewed the company’s data on the plane and “concluded that it met all certification and regulatory requirements.” 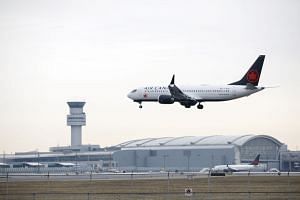 The company, which is based in Chicago but designs and builds commercial jets in the Seattle area, said there are “some significant mischaracterisations” in the engineers’ comments.

Boeing’s System Safety Analysis of the flight control software – suspected to have contributed to the Lion Air jetliner crash in October and also under the spotlight in the Ethiopia accident – understated the power of the system, the engineers told the Seattle Times.

The newspaper said the analysis also failed to account how the system could reset itself each time a pilot responded – in essence, gradually ratcheting the horizontal stabilizer into a dive position.

FAA technical experts told the newspaper that as the agency’s certification of the 737 Max proceeded, managers prodded them to speed up the process as development of the Max was nine months behind that of the rival Airbus’s A32neo.

The Seattle Times said the safety analysis ranked a potential failure of the Maneuvering Characteristics Augmentataion System, or MCAS, as “hazardous,” one step below “catastrophic.” But even that designation should have been enough to prod reliance on more than just one input sensor, the engineers told the newspaper.