BARCELONA - Chinese handset makers trotted out their latest smartphones built for faster 5G networks at the biggest trade show for mobile technology, amid political tension between the United States and China over the use of Chinese firm Huawei’s equipment to build 5G networks.

At the Mobile World Congress (MWC) in Barcelona, the world’s fourth-largest smartphone maker Xiaomi became one of the first to put a price on its 5G smartphone.

The Mi Mix 3 5G, with a price starting from 599 euros (S$918), launches in May. The low price elicited gasps from the audience at the congress. Xiaomi has not said when the phone will be available in Singapore.

The world’s largest handset maker Samsung was the first to announce a 5G mobile phone – a variant of its flagship Galaxy S10 smartphone – last week, but did not reveal the pricing or availability .

Huawei said its 5G handset, the Mate X,  will start at  2299 euros. The device has a foldable screen that extends from 6.6 inches to 8 inches when unfurled.

South Korean handset maker LG and Chinese handset maker Oppo have also made 5G smartphone announcements here, though they have yet to release the pricing or availability of their models.

Unlike critical network infrastructure, 5G smartphones are unlikely to face any scrutiny over the origin of the chips enabling their 5G functionality. The majority of these phones – from about 18 device makers to date – use American firm Qualcomm’s X50 5G modem.

Depending on the mobile connection, 5G networks can be 10 to 100 times faster than 4G networks. A 1GB movie can be downloaded in around 3 seconds.

Real-world speeds, though, are likely to be much lower.

Apple, which does not have a presence at the congress, is unlikely to introduce a 5G iPhone this year, according to a Bloomberg report.

Last week, Reuters quoted Intel executives saying that its 5G modems will not be in smartphones till 2020. Apple uses Intel’s modems in its latest models.

The 5G smartphones on show at the congress are early prototypes and the actual devices are expected to ship later this year. Even so, it could take a while before most consumers can enjoy the benefits of the technology.

Forrester Research vice-president Thomas Husson said it will take another five to seven years before 5G phones are adopted by the masses in most countries.

“Telcos and network equipment providers should learn from 3G and 4G roll-outs and not overpromise on the technology,” he said.

Also, 5G is at “the centre of the economic and political war between the US and China” because it will be the backbone of a fully-connected world, Mr Husson added. 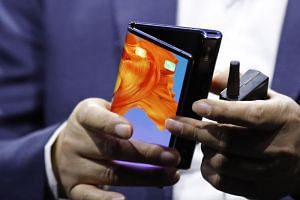 What you need to know about 5G

The US has been urging its allies to ban Huawei 5G equipment in 5G networks because of fears that the equipment could be used by the Chinese government for espionage.

Market research firm Gartner expects a gradual roll-out of 5G and predicts that less than 45 per cent of telcos globally will have launched a commercial 5G network by 2025.

It cites the lack of a killer application for 5G and the slow process of allocating radio spectrum for 5G phones to work as some of the reasons for its forecast.

Mr Wayne Lam of market research firm IHS Markit is more optimistic. He said that the mobile industry has never been better prepared for such a major transition.

“The 5G ecosystem is significantly more mature, at this point, compared to the same time during the (4G) transition,” he said.

“Key 5G chipsets have been tested, proven and designed into devices, and the industry is now poised to deliver its first 5G smartphone in early 2019.”

He predicts that the adoption of 5G smartphones in its second year of introduction in 2020 will reach six times the volume of the 4G smartphones during the same time frame in 2011.

In Singapore, 5G networks are slated to roll out after 2020, which means consumers here are unlikely to benefit from the higher speeds offered by 5G smartphones. These devices, however, will still work with existing 4G networks.

But those who wish to purchase 5G models may be able to do so. Mr Alexander Dehmel, manager at market research firm GfK thinks that smartphone makers and local telcos will launch 5G phones here despite the lack of 5G networks.

“Singapore, being a strategic hub in Asia, will be one of the first few hotbed markets for brands to launch their latest product innovation and technology,” he said.