SINGAPORE - Local YouTuber Preeti Nair and her brother Subhas were on Wednesday (Aug 14) given a conditional warning over their controversial online rap video made in response to a "brownface" advertisement.

A stern reminder has also been issued by the Infocomm Media Development Authority (IMDA) to those involved in the "brownface" ad.

In a statement on Wednesday, the police said they had completed their investigations into the video, which allegedly contained offensive content.

The police said they considered the circumstances of the case and consulted the Attorney-General's Chambers (AGC), and had given the siblings a 24-month conditional warning.

This means they must remain crime-free for 24 months or they may be dealt with in court for both their original and new offences.

A police report was made on July 29, after the video was posted on Facebook and YouTube on the same day.

The siblings later admitted to the police that they had produced and published the video.

"The video was in clear contravention of the Penal Code," the police said in their statement.

"If this video were to be allowed, then similar expletive-laden, insulting, offensive videos, targeted at all communities will have to be allowed." 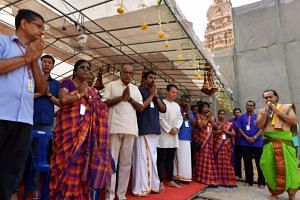 Preetipls video incident: Racism exists in S'pore, but situation has improved over the years, says Shanmugam

'Brownface' is not Singaporean

The police added there is clear evidence around the world, including in the past week, that such paths inevitably lead to more racism, more racial tensions, and, eventually, violence.

"It will be the minority communities, specifically the Malay and Indian communities, who could suffer more in such a situation.

"Singapore has taken a clear approach, to say no to offensive speech, targeted at race and religion," they added.

Ms Nair, who is better known as Preetipls, and Mr Nair, a rapper, subsequently issued public apologies for their actions.

Ms Nair's video was made in response to an advertisement featuring Mediacorp actor and DJ Dennis Chew. He was pictured as four characters - apparently a Chinese man and woman, a Malay woman wearing a tudung, and, with his skin darkened, an Indian man.

The ad was created for epaysg.com, an e-payments website.

Mr Chew also apologised for his role in the ad, saying: "My role in a recent ad has caused much disappointment. For many days I held back what I have to say, afraid of making things worse. I feel terrible about how things turned out."

Mr Chew's post comes after several apologies on the incident, including those by e-payment firm Nets and creative agency Havas Worldwide Singapore.

Home Affairs and Law Minister K. Shanmugam said Ms Nair and her brother's video crossed the line and was unacceptable. "When you use four-letter words, vulgar language, attack another race, put it out in public, we have to draw the line and say 'not acceptable'," he said.

He also said the siblings had every right to discuss racism, but the manner in which they did so was wrong.

"We want to build a cohesive society, but racism corrodes and deepens the fault lines in society. We do a lot to counter it, and we have set out what we do," he added.

In their statement, the police said they also received reports on the e-pay advertisement, which had been referenced in the rap video.

The AGC had advised that there was no criminal offence disclosed in respect of the advertisement, the police said, adding that no further action would be taken.

In a separate statement on Wednesday, IMDA said that it had issued a stern reminder to those involved in the "brownface" ad on the importance of paying attention to racial and religious sensitivities.

IMDA, which completed its assessment of the ad, said that while it did not breach the Internet Code of Practice, it was done in poor taste and had caused offence to minority communities.

All advertising companies and other content producers are expected to be similarly mindful of these sensitivities, the authority added.

IMDA said that it would not hesitate to take action against any content found to be in breach of its Codes of Practice and guidelines.

Ms Nair also issued a statement on her social media accounts on Wednesday evening, saying "the case is closed" and thanking those who offered her help in the past two weeks.

"Don’t get me wrong - I understand exactly why people got offended with the (music video) so I’m not here to justify it, I am here to say thank you and let’s hope we don’t see anymore painted faces and 'offensive rap videos' ever again," she wrote, adding that "we should all strive to be more accountable, both individually and as corporations."