The Land Transport Authority (LTA) is reviewing whether to bring forward its end-2020 deadline that will ban all personal mobility devices (PMDs) without a certification from public paths, in the light of recent fire incidents.

Currently, riders of non-UL2272 certified PMDs are allowed to ride their devices on public paths until Dec 31, 2020, despite a ban on the sale of such devices kicking in early this month.

However, in response to queries from The Straits Times, LTA said yesterday: "In view of recent fire incidents related to the charging of non-UL2272-certified devices, LTA is reviewing if the deadline for user device compliance should be brought forward."

Conforming with the UL2272 standard - a certification system that evaluates PMDs on the safety of their electrical systems - would significantly improve safety against fire and electrical hazards, said LTA.

Two of the three fires that made headlines in the past week involved electric scooters.

On Monday afternoon, two brothers fled from their fourth-storey Ang Mo Kio flat when their electric scooter exploded while being charged. The flat was gutted, and two neighbouring units were damaged.

Four days earlier, on July 18, a flat in Bukit Batok was razed by a fire. Home owner Goh Keng Soon, 40, was unconscious when he was pulled out of the burning flat. He died two days later in hospital. The blaze was linked to three e-scooters found burnt in the unit.

Mr Goh, a private-hire driver, may be the first known person to have died in a fire linked to a PMD.

Last year, 74 PMD-related fires were reported, a 51 per cent spike from 2017, statistics from the Singapore Civil Defence Force (SCDF) showed.

The number of PMD-linked fires has been on the rise, in tandem with the growing popularity of e-scooters and electric bikes which are now increasingly used by delivery riders.

Experts say PMD-linked fires could have been caused by overcharging faulty or modified batteries, or substandard or non-compatible chargers procured from dodgy retailers.

Most of the fires occurred when the PMDs were being charged or shortly after.

When batteries are being charged or discharged, electric currents either flow into the battery (charging) or flow out of the battery (discharging), explained Associate Professor Sanjib Kumar Panda of the electrical and computer engineering department at the National University of Singapore (NUS).

He said that during the process, heat develops and needs to be dissipated to the surrounding medium in order to maintain the temperature within allowable limits.

"If a wrong charger is used or a wrong electric motor in a PMD is used, the charging/discharging current could be higher than the recommended values for a par-ticular battery, and this may cause overheating and supplement aggressive chemical reactions within the battery, resulting in fire and damage not only to the battery, but also the place where charging is taking place."

NUS Associate Professor Wang Qing said the overheating is usually caused by "side reactions", which happen at the battery's electrode-electrolyte interface.

The temperature inside the battery may then rise to the point of melting the plastic separator in between the two electrodes, causing the battery to short, said Prof Wang.

This generates more heat, and the processes may eventually cause the electrolyte's solvent to burn along with other components in the battery, he said, adding that its casing and other flammable parts can also catch fire. 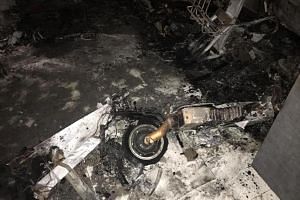 Three hospitals ban charging of PMDs, except in specified areas

PMD batteries could be dangerous if they are not quality items, as PMDs have a large battery pack and the energy in the battery is a lot higher, said Prof Wang.

PMD retailers say that devices with shoddy batteries and chargers could have come from errant retailers who import and sell devices without making sure of their safety standards. It is also common for riders to modify PMD batteries themselves.

Mr Victor Lee, sales manager of Falcon PEV, an e-scooter and e-bike distributor, said that owners often undertake modifications to make their devices go faster. "Most of them are home-based DIY (do-it-yourself) style, so they may not have the professional knowledge or set-up," said Mr Lee.

"Without the BMS, it is very, very dangerous, there is nothing to stop it from exploding," said Mr Jin.

PMD riders who get their devices from the second-hand market or from unreliable sources also risk purchasing items with dodgy batteries or chargers, he said.

Such devices could be a few hundred dollars cheaper than models from authorised retailers, said PMD retailers. The price of a popular model, such as the Inokim, DYU, Zero 8 and AM-GT, ranges from around $700 to more than $1,000, said Falcon PEV and Kernel Scooter.

Mr Jin of Kernel Scooter said: "In so many of the cases, we can see that the chargers are not Safety-Mark approved."

The Safety Mark indicates that the AC adaptor of the PMD has met safety requirements, said Mr Jin, but errant retailers would import and sell items without going through this certification process.

When the battery explodes, the flaming pieces are like "fire bullets" which easily trigger a blaze, he said.

Among observers, there is little doubt that the new certification system for PMDs would help drive down such fire incidents.

NUS transport infrastructure expert Raymond Ong said that a review of the deadline was necessary for safety reasons, adding that consumers should be given lead time to make the conversion to a certified device.

Burn victim of e-scooter fire back on device

Said Dr Ong, who is also a member of the Institution of Engineers Singapore: "The UL2272 certification covers the electrical and mechanical components. It should at least reduce the probability of fire hazards.

"Most importantly, we need the certification to provide consu-mers with peace of mind and provide confidence."

In response to queries from The Straits Times, Nee Soon GRC MPs Louis Ng and Lee Bee Wah had called for the LTA to bring forward the deadline for all PMDs to be UL2272 certified.

Said Ms Lee: "Given the safety issue and the large numbers of PMDs to check, they (the LTA) should be empowered to confiscate non-compliant PMDs, starting from now.

"If it is left to users to comply, I fear we cannot ensure compliance by the stated deadline."

Mr Ng said that making sure everyone is on board with the certification is the first step to ensure fire safety.

"Once we are past that first safety mark, then we go to the second mark about charging it correctly within the right hours, and not overcharging it."

Mr Desmond Choo, an MP for Tampines GRC, said that there is scope for the LTA to work with grassroots organisations to educate residents about managing their PMDs.

In its reply yesterday, LTA said it had adopted the UL2272 standard in September last year to improve public safety and minimise fire incidents, and set the initial deadline of end-2020 after taking into account public feedback, including that from users and retailers.

LTA added: "We strongly encourage owners to switch out early for their own safety as well as (that of) those around them.

"When purchasing PMDs, consumers should try to buy from reputable sources and look out for their UL2272 certification. Consumers should also avoid overcharging batteries, modifying their PMDs or tampering with the electrical components of their devices."

What PMD owners need to know