SINGAPORE - Motorised personal mobility devices (PMDs) such as e-scooters will have to conform to a safety standard, to tackle the rampant cases of fire involving these devices, which happen at least twice a month on average.

The new requirement will be phased in over the next two years, starting with retailers, who can sell only devices that are compliant with the new standard from July 2019.

Owners of motorised PMDs that do not adhere to the specifications can use their devices until end-2020. From January 2021, such PMDs will be illegal on public paths.

The new safety standard for PMDs is spelt out in the Land Transport (Enforcement Measures) Bill, which was passed in Parliament on Monday (Sept 10).

It will follow the UL 2272, which is developed by an independent United States certification company and specifies a set of safety requirements covering the electrical drive train system, including the battery system, other circuitry and electrical components for motorised PMDs.

Senior Minister of State for Transport Lam Pin Min told Parliament during the debate on the Bill that there were more than 80 fires involving motorised PMDs since 2016 and they pose “serious public safety concerns”.

“Currently, many of the motorised PMDs sold in Singapore do not conform to any reliable safety standard... Conformity with the standard under UL2272 can significantly improve the safety of motorised PMDs against fire and electrical hazards,” said Dr Lam. 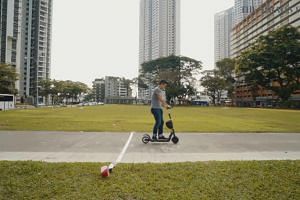 The Bill, which was supported by all 12 MPs who spoke on it, will also tighten regulations on PMDs, like a registration regime for e-scooters, which will start in early 2019.

With the new law, the Land Transport Authority can outsource the work of its enforcement officers. These outsourced uniformed officers will be given powers to examine PMDs used on public paths to ensure they comply with the rules and deal with offences like the indiscriminate parking of bicycles.