SINGAPORE - Racism exists in Singapore, but the situation has improved over the years and is much better now than before, said Home Affairs and Law Minister K. Shanmugam.

The issue is discussed openly here and studied by academics, he noted, pointing to a study released last week by the Institute of Policy Studies (IPS) and racial harmony group OnePeople.sg on racial and religious harmony.

He also agreed with YouTuber Preeti Nair and her brother Subhas that they had the right to discuss racism, but the manner in which they did so was wrong.

Mr Shanmugam spoke to reporters at an event at Sri Siva Krishna Temple in Marsiling on Sunday (Aug 4), a day after the Nair siblings issued a second apology over a controversial rap video made in response to a "brownface" advertisement featuring Chinese actor Dennis Chew.

"There is racism in every multiracial society that we know of. And there is, in Singapore," he said, adding that the issue is a key concern for the Government.

"We want to build a cohesive society, but racism corrodes and deepens the fault lines in society. We do a lot to counter it, and we have set out what we do," he added.

Like everyone else, Ms Nair - also known as Preetipls - and her brother had every right to raise the issue of racism, the minister said. But he questioned the way it was done.

The Nair siblings had made a rap video called K. Muthusamy - one of the characters Mr Chew portrayed in the ad, a man with visibly darker skin. Mr Chew had also portrayed a woman in a tudung.

Both the ad and rap video raised concerns about racial sensitivity in Singapore and were criticised by politicians as being offensive and unacceptable. Police reports have been made against both. 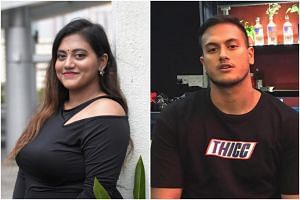 Apology by YouTuber Preetipls and brother for their race rap video is 'mock, insincere apology': MHA

Said Mr Shanmugam of the Nair siblings: "If everyone starts discussing race and religion in the way they did, then you will in fact get more racism, not less.

"That is our key concern. They have used the language of resistance in America, but we thankfully are in a very different situation."

In their second apology on Saturday, the Nair siblings said they "unconditionally apologise for the tone, aggression, vulgarities and gestures used in the K. Muthusamy music video".

They had first issued an apology on Friday "for any hurt that was unintentionally caused" by the video.

That initial apology was criticised by the Ministry of Home Affairs (MHA), which said it was "mock, insincere" and that it closely followed the wording of a statement issued by the creative agency and management company involved in producing the "brownface" ad for e-payments website epaysg.com.

Mr Shanmugam said that in any multiracial society, there is always a need to frankly discuss issues like how to deal with casual racism.

There are regular conferences, symposiums and dialogues held by government agencies, non-governmental organisations and other groups on such matters, he added.

The country has progressed by having clear government policies, and with Singaporeans generally accepting multiracial values, Mr Shanmugam said.

"We are not in the American situation. And we must see how we can progress further, because as many of us recognise, there continues to be racial fault lines and religious fault lines. It is always a work in progress," he added.

Turning to the ad, Mr Shanmugam said it was in poor taste.

"Many disapprove of it and the people behind the ad, and others need to learn from that - be much more sensitive," he added.

As the country approaches its 54th birthday, Mr Shanmugam said there is much that Singaporeans can be positive about.

"We must continue to focus on getting things better, discuss issues openly and work on them."

Academics and researchers who study race relations told The Straits Times that the recent episode may have been a result of a lack of public discussions about race in Singapore.

IPS senior research fellow Mathew Mathews said that while surveys of racial harmony have consistently shown that there is still racial prejudice in Singapore, talking about race or religion, especially the "more unsavoury aspects", is often deemed as highly sensitive.

"Sizeable portions of the public prefer that such concerns...be discussed (behind) closed doors and not brought out to the public," he added.

"Because we don't talk about race much, many people don't have the vocabulary or the sensitivity to deal with these issues."

Dr Mathews added that the 'in your face', confrontational methods used in some societies like the United States might be acceptable in those contexts, but is often seen even there as a last resort.

"Race and religious relations in Singapore won't do well with such antagonistic approaches," he said.

He added that Singapore does not have a history of severe oppression or ongoing discrimination like police brutality similar to the US, to warrant such a reaction.

Singapore University of Technology and Design senior lecturer Nazry Bahrawi said the lack of sensitivity about race was displayed in an article published by the Singapore Kindness Movement (SKM) on Friday, that seemingly defended casual racism but was later claimed to be a social experiment.

In the article, writer Edwin Yeo wrote that the concepts of "brownface" and "casual racism" originated from political correctness in the West, and mocked the choice of song for the Nair siblings' rap video: "What, Munnaeru Vaalibaa was taken?"

Munnaeru Vaalibaa – which translates to "Move Forward, Youth" – is a Tamil song commonly sang in schools and at National Day Parades, and was written by retired teacher Mr S. Jesudassan in 1966.

That the article was published and later claimed to be a social experiment following backlash online was "discouraging", said Dr Nazry.

He added: "The painful experience of racism is not something to be treated flippantly, discounted or commodified."

Dr Nazry said that race relations have developed differently in Singapore and in the US, and that Singaporeans will need to "develop their own vocabulary to outline our experiences of race relations here".

Nevertheless, he added, terms like "brownface" or "casual racism" resonate in Singapore even if they had their origins in the US because of the similar experiences for minorities in both countries.