Highlighting a recent incident where the police were falsely alleged to have targeted Malays during their enforcement checks at MRT stations, Mrs Teo said such baseless allegations stir up racial tensions and damage people's confidence in the Home Team.

"We must redouble our efforts against hate speech and attempts to break our social cohesion," she said.

She was speaking to a group of Home Team officers and volunteers gathered for the annual Home Team National Day Observance Ceremony.

"We will update the Maintenance of Religious Harmony Act to strengthen our levers against elements that may harm our religious harmony," said Mrs Teo.

The minister, in her remarks, also outlined two other security challenges for Singapore - extremist ideology and foreign interference.

She pointed out that terrorists can easily spread their propaganda online and people may become self-radicalised while Singapore must guard against foreign interference and not risk being manipulated. 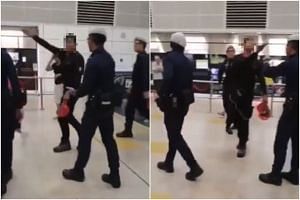 There were also the security risks associated with Singapore's open borders, said Mrs Teo, citing the incident last month where Myanmar nationals were deported after they were found to have organised and gathered support for armed violence against the Myanmar government.

"Events like these do not mean that we should close our borders, but we need to be vigilant to who is allowed to stay here. Our hospitality should not be exploited to the detriment of our people," she said, noting that new technology could help keep borders secure.

Singapore must also be vigilant about terrorist activities and build resilience against extremism, said Mrs Teo, highlighting the fact that SGSecure initiatives could help raise awareness of early signs of self-radicalisation.

In preventing foreign interference, Singapore must nurture a digitally literate and discerning public, and the legal framework must be updated with powers to expose the covert behaviour of foreign actors, she said.

Mrs Teo told the gathering as 2019 marked Singapore's Bicentennial, the team behind the event pondered and consulted people over important questions such as what Singaporeans believe defined them as a people.

"No two persons had exactly the same views but there were common traits identified," she said.

These included Singapore's openness to people, trade and investment, multiculturalism which undergirds the national identity, and the belief that self-determination has bound Singaporeans to be masters of their own fate.

"These traits continue to be important for our survival and success, but they also point to the challenges we face," said Mrs Teo.

"Our Singapore is for all of us to defend. To keep it safe and secure, and a home that we will always feel comfortable in, every Home Team officer's effort makes a difference."