SINGAPORE - Allegations that police officers conducting checks at MRT stations target Malays are untrue and irresponsible, the police said in a Facebook post on Wednesday (July 10).

A video showing police officers conducting checks on a man at Bishan MRT station has been circulating online.

The man in the video, who speaks to the officers in Malay, asks them why they "always scan Malays".

Police said there have been several comments online stating such checks were targeted at Malays.

"Such allegations are untrue, baseless, irresponsible, and may stir up racial tensions," the police said, warning that they will take action against those who post such remarks.

"The police take a stern view of persons who post remarks online that could cause ill will and hostility between the different races or communities in Singapore and they will be dealt with in accordance with the law," said the post.

Police said the incident in the video happened on March 5 this year.

"The majority of persons checked by the same team on that same shift were non-Malays," said the police.

Officers are impartial in their checks, and are trained to carry them out professionally, added the police. 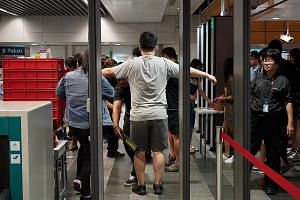 Be ready for airport-like checks at some MRT stations

Robots could be rolled out for security patrols at MRT stations

"Such checks are necessary to ensure that our public transport system remains crime-free, and to deter would-be-criminals from committing criminal offences and terrorist acts," said the police.

TransCom officers made more than 720 arrests in 2018 as a result of spot checks conducted on Singapore's transport network.

The majority of those arrested were for serious offences such as possession of dangerous weapons and drugs, as well as having a warrant of arrest issued against them.

"We hope that the public can understand and appreciate the need for such checks, which ensures the safety and security of commuters, and will cooperate with the officers as they carry out their responsibility," the police said.