SINGAPORE - The person who booked a community club (CC) hall for the 10th anniversary celebration of the Arakan Army's founding had misrepresented the event as his company's health talk, said the People's Association (PA).

The Straits Times had earlier reported that the celebration on April 7 was held at a community club here.

Pictures of the Singapore event showed actors on stage dressed in military uniforms and holding replica firearms. Arakan Army (AA) chief Tun Myat Naing addressed participants via a video link, and called on them to unite and fight for Rakhine independence through armed conflict.

In letters to The Straits Times, readers raised questions about how the Myanmar nationals were able to book the facility for such activities and what checks are in place to guard against such incidents.

Responding to queries from ST and those letters on Thursday (July 18), the PA and police said CC application forms clearly state the community facilities should not be used for any religious, political or unlawful purposes.

Those booking facilities must truthfully declare the purpose, said the PA, adding that it reserves the right to cancel any booking that violates its terms as well as forfeit the booking fees.

Members of the public who spot anything unusual in community club premises can alert staff on duty, it added.

The PA and police also reminded event organisers to apply for the necessary permits and licences.

Cause-based events will require a police permit under the Public Order Act, unless they meet conditions for exemption, said the PA and police. 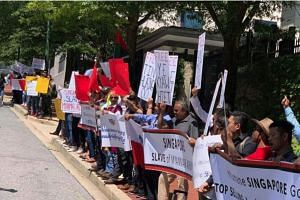 "The Police will, however, not grant any permit for assemblies organised by or involving non-Singaporeans that are directed towards a political end, including advocating for or against the political causes of other countries."

Staff from four CCs who spoke to The Straits Times on condition of anonymity said that facility bookings are mostly for weddings and birthdays.

Theatrette and multi-purpose hall reservations must be made in person and the purpose filled out in the application form.

Approvals vary from centre to centre, however. Not all CC management committees review each and every application, with some staff verbally highlighting only certain cases to them.

One CC does not station employees inside private events, with its staff member saying "we have no business to be there".

Another conducts spot checks before and during the event. Staff will tell organisers to stop activities if they break rules like cooking inside the multi-purpose hall. If organisers refuse, they will be reported to the management committee for further action.

The CCs charge from $100 an hour to more than a thousand dollars per block booking, which are then channelled into the management committee fund to support operating costs.

Last week, police arrested and deported a group of Myanmar nationals living in Singapore for using the city-state as a platform to organise and gather support for armed violence against the Myanmar government.

The Ministry of Home Affairs said these Myanmar nationals organised and mobilised members of the local Myanmar community to support the AA and its political wing, the United League of Arakan. AA has been designated a terrorist group by the Myanmar government.