A calibrated cohort-based approach is fair to different generations, he says, while noting the subsidies for all

The Merdeka Generation Package, like that for the Pioneer Generation, is custom-made to better meet the needs of Singaporeans in their silver years, said Finance Minister Heng Swee Keat.

And while younger cohorts will have needs, theirs are not of the same nature as those of these seniors, Mr Heng said in replying to MPs who spoke on Budget 2019.

"It is a plan that has been carefully studied over a significant period of time," he said of the Merdeka package, noting that not many countries have gone through similar rapid growth leading to relatively wide divergences between the older and younger generations.

"Building on our substantial base of permanent healthcare schemes, a calibrated cohort-based approach is fair to different generations."

The $6.1 billion set aside for the Merdeka Generation Package - for those born in the 1950s - was discussed by many of the 55 MPs who spoke this week, some of whom asked if there would be similar packages for future cohorts.

Some noted those born in the 1960s have been called the Majulah Generation. Others worried about the cost burden.

Mr Heng noted the Merdeka package was on top of existing schemes, and pointed out that the Ministry of Health expects to spend $6.1 billion this year alone - to subsidise patient bills through existing permanent schemes that all citizens enjoy. This does not include spending to enhance healthcare facilities, and to research more effective treatments.

He also noted that during Singapore's journey from Third World to First, the Merdeka Generation, and pioneers, did not benefit from the social safety nets in place today. They had fewer or no educational opportunities and earned less, and their Central Provident Fund contributions were very much lower.

"So, a cohort-based approach to support them in their silver years is appropriate," he said. Today, he noted, more than nine in 10 Singaporean youth go on to post-secondary education, compared with one in 10 among pioneers and fewer than two in 10 among the youngest in the Merdeka Generation.

Schemes over the years - Medisave, MediShield Life and CareShield Life - ensure that younger generations will be in a much better position to look after their healthcare needs when they retire, he added.

"Of course, some among us will still need more help. The Government will look at the needs of each group, and tailor our policies and programmes in the future," he said.

Many seniors he has met want to stay active, healthy and connected, he added, saying: "We look to you to redefine ageing and forge a new path on what it means to be the independence generation."

Mr Heng also reiterated that the Merdeka package is not linked to the election cycle or to the unexpected surpluses in this term of government. 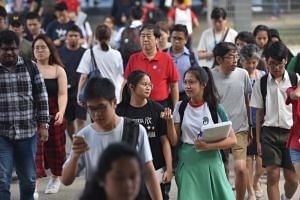 Government must be prepared to experiment and take calculated risks: Heng Swee Keat

Rather, a responsible and long-term approach to planning means younger Singaporeans need not fear they will end up bearing a disproportionate share of the cost.

"But if we lose this discipline and make rash promises, like universal healthcare benefits regardless of circumstances, I would worry for our future generations," he added.

Workers' Party chief Pritam Singh (Aljunied GRC) had on Tuesday said some see the Merdeka package as timed ahead of the election, drawing a rebuttal from Senior Minister of State Chee Hong Tat.

Yesterday, Mr Singh asked Mr Heng if it was possible to still consider moving away from cohort-based packages to something more permanent and universal.

In reply, Mr Heng reiterated that there are already many permanent subsidies in the healthcare system.

"The Merdeka Generation and Pioneer Generation packages build on top of what we already have," he said.

Paper qualifications not the only criterion for public service

No joy to say we recover from mistakes fast: Chan Chun Sing

No conflict of interest between AGO and ministries in audits: Chan

Investors urged to take only risks they can live with

Inter-agency task force on AI to be set up

Growth in annual expenses to be reduced

Motivations aside, Govt spending to improve lives a good thing