Singer Jung Joon-young found himself in the hot seat after he reportedly shared sex videos in a chatroom with other artists, including BigBang's Seungri and Choi.

The public backlash saw Jung, 30, withdrawing from show business on Wednesday (March 13), two days after Seungri, 28, himself made a similar decision following a string of scandals - to protect the reputation of boyband BigBang.

On Thursday, as the adverse publicity intensified, and pressure mounted from fans for the artists implicated to do the right thing, Junhyung's label said the 29-year-old was retiring too.

Hours later, Choi's management, insisting that it had no intention to hide or cover up the truth, announced that he was bowing out.

According to Korean media sources, there is also speculation that Choi, 29, might have bribed the police into not revealing his drink-driving offence in 2016. 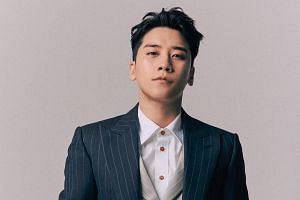 Seungri's woes: A timeline of the BigBang singer's troubles

Local broadcaster SBS reported that Choi, Jung, Seungri and others were involved in a discussion over how to keep the offence under wraps, including bribery.

In Junhyung's case, the writing was on the wall for his career after he admitted that he had viewed footage shared by Jung after they met in 2015, and exchanged lewd text messages regarding the sex videos.

Junhyung was questioned by the police on Wednesday, as part of a probe into Jung's activities, reported portal allkpop. On the same day, a statement from Junhyung's label stated that he was aware that the incident "is not one that can be forgiven, and that he feels greatly apologetic towards fans of Highlight for breaking their trust and repaying their love with disappointment".

Even as the spotlight fell on Choi and Junhyung yesterday, there was no respite for Jung and Seungri when they turned up separately for police interviews.

"I am sorry. I apologise for causing trouble to all the citizens of the nation," a subdued-looking Jung told a large crowd of reporters.

Seungri, who had already been questioned by the police for more than eight hours on Feb 27, said: "I once again bow my head in apology to all citizens of the nation and the people who have received harm because of me."

Certainly, netizens have not stopped speculating over who else could be hauled up next for inappropriate behaviour.

In a bid to nip such talk, the management agencies of other K-pop acts have issued statements, threatening to take legal action against those who spread rumours.