Datuk Seri Shamsul said he hired Mr Haziq to be his private secretary after screening several applications for the job, and personally chose him.

"I feel 'blur'. I am baffled that he would do this. All the time he has served me, he has conducted himself professionally.

"We went to Saudi Arabia on a work trip together. Nothing unusual stood out.

"I have also spoken to the ministry's secretary-general and other staff members, and they too had no complaints about Haziq.

"I have known him since around 2011, when he was a student activist. He was an important youth leader for PKR back then," he said at a press conference here on Thursday (June 13).

Mr Shamsul was commenting on his private secretary who had recently come out to claim that he and Economic Affairs Minister Azmin Ali were the two men in a sex video that went viral earlier this week. 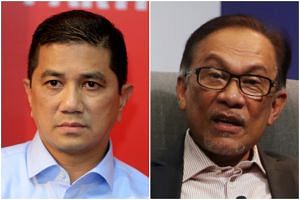 At the press conference, Mr Shamsul said Mr Haziq had been suspended from his duties with immediate effect.

He has also been issued a show-cause letter dated June 12, and failure to respond within three days could result in his dismissal.

Mr Shamsul said he had not heard from Mr Haziq since Tuesday, when he contacted the latter over a work-related matter.

"I had an assignment in Myanmar and only returned on Wednesday.

"After I learnt about the incident, I sent him a message on WhatsApp and requested to meet him at the office.

"Unfortunately, there has been no reply from him," said Mr Shamsul.

He said Mr Haziq has not showed up at work since the confession video was published and is considered AWOL (absent without leave).