PUTRAJAYA - Muhammad Haziq Abdul Aziz, the Malaysian government official who made a "confession" video to claim he had homosexual relations with Economic Affairs Minister Azmin Ali, has been suspended from his duties, local media reported on Thursday (June 13).

Malaysia's Harian Metro newspaper said Mr Haziq has been asked by the ministry to provide an explanation over the matter within three days, with a "show cause" letter issued to him, or risk being removed from office.

Video clips of the alleged gay sex video have rocked Malaysian politics since they were released early on Tuesday.

Datuk Seri Shamsul told a news conference on Thursday that the show cause letter was issued on Wednesday (June 12).

"The ministry will not hesitate to end his contract immediately if there is no response within the stipulated period," the deputy minister said, as quoted by Malaysiakini news site. He said Mr Haziq has not been seen in the office since Tuesday.

Mr Shamsul said Mr Haziq's contract had stipulations regarding conduct that could tarnish the government's image. 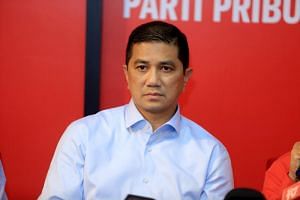 Malaysian official who said he was in sex video had at first denied having a role, says friend

Meanwhile, Mr Haziq said on Thursday that he has lodged a police report, after receiving flak from netizens for admitting that he was the other man in a sex video implicating Datuk Seri Azmin, The Star daily reported.

On Facebook, Mr Haziq posted two blurry pictures of the police report with the accompanying caption: "You can call me anything you want but I was never raised a liar."

The police report was lodged at the Kelana Jaya police station in Selangor.

"The reason why I made this police report is to rebut all the allegations made by netizens, cybertroopers, Hilman Idham and others," he stated in the report.

Mr Hilman is Mr Azmin's political secretary, who had lodged a police and a qazaf report against Mr Haziq in Putrajaya on Thursday. A qazaf report lodged with the Islamic authorities is a complaint against slander linked to adultery, and asking the authorities to launch an investigation.

In his police report, Mr Haziq reiterated his earlier claim that HMr ilman had forced him to deny his presence in the sex video when they met at a restaurant in a hotel in Putrajaya.