There have been a lot of rumours lately about Dr Mahathir and Anwar.

Among them, Parti Keadilan Rakyat (PKR) deputy president Azmin Ali and Council of the Elders chairman Tun Daim Zainuddin were said to be trying to stop Anwar from taking over the PM post; PKR is said to be split into two factions, with the one led by Anwar interested in forming a new alliance with Umno while the other, led by Azmin, keen to stay in Pakatan.

There were also talks that Azmin would take over as prime minster while Mahathir's son Mukhriz would be his deputy.

Similarly, there are also many unverified "stories" around the Port Dickson by-election.

For example, the Mahathir-led Parti Pribumi Bersatu Malaysia (PPBM) does not want Anwar to become prime minister, and the Negeri Sembilan PPBM was dissolved on the eve of nomination, giving the party an excuse not to campaign for Anwar.

On top of that, former Negeri Sembilan Menteri Besar Mohd Isa Samad was said to have been sent by Mahathir to confront Anwar in Port Dickson.

Anwar will still win with or without the help from PPBM, but his image could be tarnished if voter turnout is poor and he does not get a lot of Malay votes, not to mention many more rumours that will pop up after the by-election to affect investor confidence.

As a consequence, Tun Mahathir announced after chairing the Pakatan Harapan presidential council meeting that he would show up in Port Dickson with other PH component party leaders on Monday night.

"They're talking about my quarrel with Anwar and saying I don't support Anwar because of the quarrel," he said.

The last time Mahathir campaigned for a candidate (from the Barisan Nasional) in a by-election was in Bukit Gantang in 2009.

This time, he is doing something to shatter the customary practice that a sitting prime minister should not campaign for a candidate in a by-election.

This shows that indeed he bothers a lot about the rumours.

It is believed that the same question was raised by other PH leaders at the presidential council meeting, and had proposed that Mahathir campaign for Anwar in PD because if the rumours are not quelled soonest, local businesses and foreign investors might have the impression that Malaysia is politically unstable.

As soon as the decision was made, Mahathir instructed Simpang Renggam MP Maszlee Malik to visit the voters at several locations in Port Dickson on the same afternoon while officiating the election campaign office there.

Maszlee, who is also the education minister, was the first PPBM leader to campaign in PD, focusing mainly on Bagan Pinang state assembly seat currently held by Umno.

Isa won with a landslide there in 2009 by-election. 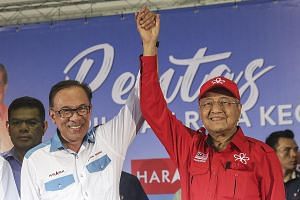 I forgive Mahathir even though there was no apology, says Anwar

Compared to Chinese and Indian voters, response of the PD Malay community appears to be rather subdued.

Tun M's arrival is poised to raise the Malay turnout so that Anwar can win with a much bigger majority.

Campaigning as a team will further strengthen Anwar's position but may also affect the PKR elections, as this will mean Rafizi Ramli's allegation that Azmin is trying to block Anwar's access to premiership is unsubstantiated.

As a matter of fact, given the more diverse background of PH component parties, the coalition should be able to come up with a stronger team to run a multiracial country like Malaysia for the simple reason leaders of its component parties will understand better the needs of people from different cultural backgrounds.

Having said that, the coalition must also improve on its leadership structure and build up its self confidence so as to concentrate on reforming the country, revitalising the economy, fulfilling its election pledges and boosting administrative efficiency.

PH's current evasive attitude in meeting its election pledges such as the recognition of the United Examination certificate from Chinese independent schools, child marriage, LGBT and repeal of draconian laws has eroded public trust towards the government.

Malaysia is a polarised country with organisations lobbying for democracy and freedom but also extreme rightist groups.

As such, Anwar can play a positive role as a dialogue partner with the Muslim community in a bid to dissolve radical religious sentiment, given his profound knowledge in Islam.

If Mahathir and Anwar can put their differences behind them and work together, they will make a perfect team whereby Mahathir will concentrate on administrative reform and corruption-fighting while Anwar can help battle religious extremism and theocracy so that the country can move forward towards the goal of a developed nation and New Malaysia.

Different component parties within the PH coalition have their own varying political platforms, and must therefore come together and settle their differences before they develop into a full-blown conflict.

Quelling the rumours with actions is a positive move in this direction.

I believe an integrated Pakatan Harapan will emerge even stronger in taking the country forward in the days to come.