SINGAPORE/BANYUWANGI - Indonesian authorities said on Sunday (April 25) that the submarine which went missing during naval exercises was found cracked into three parts on the seabed in the waters north of Bali island, and all 53 crew on board were dead.

Singapore rescue vessel MV Swift Rescue, which arrived early on Sunday, had sent down its remotely operated vehicle (ROV) and captured with its camera several images of the wreckage, including hull parts, a vertical rear steer, anchor, dive rudder and escape suit.

“Based on the authentic evidence, I declare that the KRI Nanggala-402 has sunk and all the crew have died,” Air Chief Marshal Hadi said. “They’re the best soldiers... and may the God Almighty reward their good deeds and dedication.”

The 44-year-old submarine was taking part in a torpedo-firing drill off Bali last Wednesday when it dove and lost contact. More than 20 vessels from Indonesia and countries including Singapore and Australia were deployed in search-and-rescue efforts.

At the same briefing, Indonesia’s Navy Chief of Staff, Admiral Yudo Margono, said the KRI Rigel had carried out “significant underwater contact using a multi-beam sonar”, but its ROV could not go deeper than 800m, so the task was handed over to the MV Swift Rescue for visual confirmation.

A tattered bright orange escape suit floating in the dark waters gave a glimpse of what might have happened.

“This escape suit was usually kept in a box. The fact that it has come out of the box means there was an emergency situation... Either they were not able to put the suits on fast enough, or the submarine shook while they were trying to put them on,” Adm Yudo said.

The next step will be to coordinate with other agencies, as well as foreign navies, to lift the wreckage, he added.

Earlier, debris such as a prayer mat and periscope lubricant were recovered from the waters. Searchers also detected an oil spill and an unidentified object with high magnetism at a depth of 50m to 100m.

The tragedy marked the first submarine disaster in Indonesia, which has been replacing its ageing military equipment. Adm Yudo dismissed the possibility of human error, saying the crew had met all necessary requirements for the dive.

The disaster has devastated the country.

President Joko Widodo said in a statement broadcast on Sunday: “This tragedy has shocked us all.

“We convey our deep sorrow for this tragedy, especially to families of the submarine crew. They were the best sons of the nation, the best patriots who guarded the sovereignty of the country.”

​Mr Oni Suryono, a 50-year-old driver and resident of Banyuwangi, a coastal city in East Java close to the rescue operations, said: “They are our compatriots, national heroes. Before this naval exercise, they had gone everywhere to guard the nation and maintain the country’s sovereignty.”

Singapore’s Senior Minister Teo Chee Hean expressed his condolences, and hoped the find would bring the families some closure and certainty on the fate of their loved ones.

He wrote on Facebook: “As a fellow naval officer, we are saddened that our rescue team was not able to save the sailors.”

Residents of the East Java town of Banyuwangi, which hosts the naval base from where search-and-rescue operations are being conducted, joined nationwide calls to accelerate the modernisation of Indonesia’s defence forces.

“This can be a learning point for the government to advance its military technology and be careful in how it uses its (existing) technology because its people’s lives are at stake,” said 29-year old resident Hein Ferdy Sentoso. 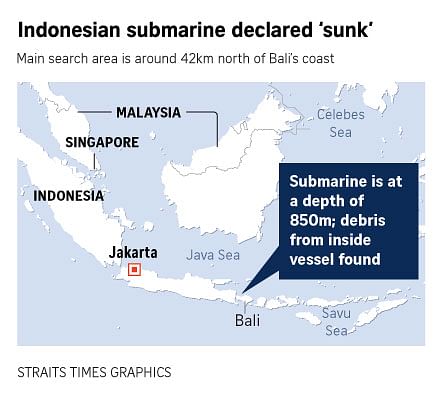