JAKARTA - Search-and-rescue efforts for a missing Indonesian submarine with 53 crew members on board have found debris believed to be from inside the submarine, Indonesian Armed Forces Commander Hadi Tjahjanto told a media briefing on Saturday (April 24).

"We have found oil spill and debris as authentic evidence... that the submarine went down," Chief Marshal Hadi said.

"Among the evidence collected from the sea surface where the submarine was reported missing include sponge from a thermal insulation sheet, a bottle of grease from inside the submarine. The sponge was torn apart from its much larger size," Indonesian Navy Chief Yudo Margono said in the same media briefing. He said the grease is used for the periscope's lubricant.

Other items found included a prayer mat for the crew members, part of a torpedo tube straightener and a cooling pipe wrapper.

Preparations are being made to salvage the submarine from a depth of 850m, said Admiral Yudo.

“With the authentic evidence we found, believed to be from the submarine, we have now moved from the ‘sub miss’ (submarine missing) phase to ‘sub sunk’,” Adm Yudo said. “The submarine possibly began to crack... as it went down at a depth of between 400m and 500m.”

He added that no bodies or survivors have been sighted so far.

The 44-year-old KRI Nanggala-402 was due to carry out a torpedo drill after it requested permission to dive early on Wednesday, but contact was then lost.

A possible power blackout during the static dive may have caused it to lose control and become unable to perform emergency procedures, according to the Indonesian Navy.

Navy spokesman Julius Widjojono has said contact with the submarine had likely been lost at 600m to 700m underwater, while by design, the vessel could withstand a depth of up to 500m.

He said on Friday that Singapore was involved in the operation as it owned a device that could detect the submarine at the estimated depth.

The incident is believed to be the first major submarine disaster for Indonesia, which has been upgrading its ageing military equipment in recent years.

Singapore Prime Minister Lee Hsien Loong, speaking at the Asean leaders’ meeting in Jakarta on Saturday, expressed Singapore’s thoughts and concern for the crew of the submarine and their families, as well as the government, people and armed forces of Indonesia.

Singapore submarine rescue vessel MV Swift Rescue, which left Changi Naval Base on Wednesday afternoon, is in Indonesian waters and is expected to reach the search site on Sunday.

Five military personnel from Singapore arrived in Indonesia on Friday to join the search and rescue operation.

Indonesia's missing submarine: What you need to know 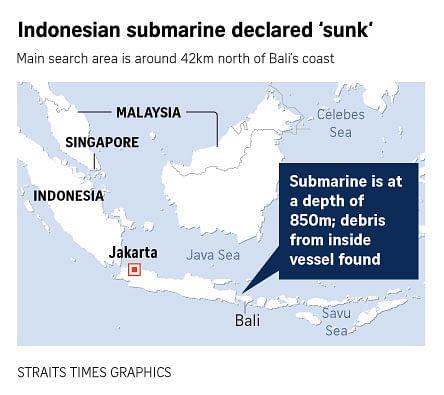