KUALA LUMPUR - A day after igniting a firestorm with a video confession on Facebook, Malaysian government official Muhammad Haziq Abdul Aziz has returned with more explosive allegations about Economic Affairs Minister Azmin Ali – this time accusing the minister of trying to get him to lie about the affair which he said had begun three years ago.

In a Facebook post, Mr Haziq said that after videos allegedly showing him having sex with the minister started circulating on social media on Tuesday (June 11), he was urged by the minister’s political secretary Hilman Idham to lie about the affair.

“I was scared and the only comfort I received from you was when you sent Hilman to meet me at Zest Restaurant in Marriott Putrajaya on that fateful day. I waited for an hour and it felt like I was a mere afterthought,” he wrote on Facebook on Thursday.

“He forced me to deny that it was you in the viral video and asked me to lie for you. I asked for more time to consult my parents and this angered him. After I refused, he made threats and said ‘this’ will be shut down within 48 hours with or without my help to lie."

“It broke me that Azmin Ali, the man I looked up to chose to tie his loose ends rather than owning up to his mistakes. I know you are a sick man because only you could have recorded the videos for personal collection after inviting me to your hotel room on all occasions,” he added.

Mr Azmin, who is also the Parti Keadilan Rakyat (PKR) deputy president, had on Wednesday categorically denied that he was one of the men in the videos, calling them an attempt to destroy his political career. 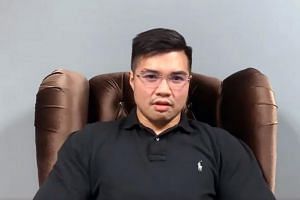 Mr Haziq, who is also a PKR member, claimed he had first been invited to Mr Azmin’s room at the Grand Continental Kuching three years ago, then again in the Sarawak capital last October in the midst of party polls.

He alleged that the relationship continued in Grand Hyatt Kuala Lumpur in March before the most recent encounter during last month’s Sandakan by-election.

Mr Hilman has confirmed meeting Mr Haziq on Tuesday, when the videos first surfaced but refused to comment further, “as we have handed over all details to the police” on Thursday morning.

Mr Hilman, who is also PKR deputy youth chief, also made a report with Islamic authorities alleging qazaf, a term referring to slander related to adultery.

Mr Haziq added: “I am worried that more videos will be leaked, and the luxury you have as a minister is deniability, whereas my future is over. You even have the Prime Minister pledging his full support before any formal investigation had been done.” He was referring to Tun Dr Mahathir Mohamad’s dismissal of the videos on Wednesday night.

“Only the truth can set me free, as I am concerned for the safety of my family and mine. I hope the public will see you as who you truly are - manipulative and has immense influence all together with your henchmen Hilman, Afif, Zuraida and the rest of your inner circle that are motivated by greed and power,” he said.

Mr Haziq was formerly part of Mr Afif's team when the latter was PKR deputy youth chief, before joining the office of then law minister Nancy Shukri as an intern prior to Barisan Nasional's (BN) defeat at last year's election.

He then won the youth leadership of a PKR division in his native Sarawak last year, before being hired by Mr Shamsul, who is also the party's information chief.

The clips were first leaked by unidentified phone numbers into WhatsApp groups in the wee hours of Tuesday. Malaysian journalists made up the majority of those added to these groups. An additional clip of the same alleged incident was released late on Wednesday.

Police say they are investigating the case, but have given no details.