While China had publicly backed the June 12 meeting, analysts say Beijing was worried that a deal between its traditional ally and the United States could harm its strategic interests.

With both Trump and North Korea leaving the door open for the summit to take place at a later date, Beijing has won more time to ensure that its interests are protected, and possibly gain leverage in separate US trade talks, according to analysts.

Foreign ministry spokesman Lu Kang on Friday (May 25) denied that China had "any ulterior motives", adding it remains committed to the denuclearisation of the peninsula, peace and dialogue to resolve the issue.

Lu urged the US and North Korea to be "patient" and "show goodwill".

Beijing's relations with Pyongyang had been strained and distant in recent years, with China backing a slew of United Nations sanctions following the North's nuclear and missile tests.

But Xi made sure to finally meet Kim this year - for the first time ever - before the North Korean leader held talks with either Trump or South Korean President Moon Jae-in.

Trump suggested earlier this week that the veteran Chinese president may have influenced the younger North Korean autocrat, whose position apparently hardened after meeting Xi twice within two months.

"Everything changed because the Chinese told (Kim) not too give up too much too quickly," Jean-Pierre Cabestan, China specialist at Hong Kong Baptist University, told AFP.

Cabestan said the second Kim-Xi summit, in the Chinese port city of Dalian, was a "turning point" in the North Korean leader's position, with Xi probably reminding Kim that he was better off dealing with his country's chief benefactor than the United States.

Xi may have asked Kim to put demands for the suspension of US-South Korean military exercises back on the table, after announcing a unilateral halt to nuclear and missile tests on April 21, said Bonnie Glaser, a senior adviser for Asia at the Centre for Strategic and International Studies in Washington. 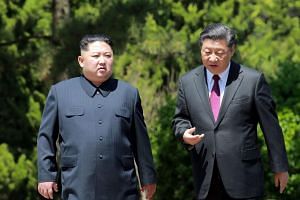 On US-North Korea talks, China may hold the cards

"After all, the 'freeze for freeze' was China's proposal, and it was a slap in Xi's face that Kim proposed to halt nuclear and missile tests while maintaining that continuation of US-ROK military drills," Glaser said.

Following the May 8 summit in Dalian, China's official Xinhua news agency said Kim had called for "phased and synchronous measures" to achieve denuclearisation - an apparent return to its demand for a quid pro quo from the US.

Earlier this week, Trump noted Kim's about-face as he called Xi a great poker player. He also said the China-North Korea border had become "more porous" - suggesting that Beijing had eased up on enforcing sanctions.

"There was a different attitude after that meeting and I was a little surprised," Trump said. "And I think things changed after that meeting so I can't say that I am happy about it." But Xi never intended to sabotage the summit, analysts said.

"Undoubtedly, Xi Jinping hoped to steer the Trump-Xi meeting in a direction that was advantageous to Chinese interests - or at least did no harm," Glaser said.

"But China would not have benefited from a cancellation that carries the risk of a return to active US consideration of military options against North Korea." .

Pence and Trump's hawkish National Security Adviser John Bolton had angered Pyongyang by raising the spectre of Libyan leader Muammar Gaddafi, who gave up atomic weapons only to die years later at the hands of US-backed rebels.

"I think that the cancellation was caused by the lack of agreement within the US on North Korea policy."

China could try to revive the summit and use North Korea as a bargaining chip in separate US trade talks, according to analysts.

"If Xi turns out to be a successful mediator between Kim and Trump, it could buy China a better US-China trade deal," Glaser said. "Definitely a win-win for Beijing."