Broadcaster CCTV showed Xi and Kim taking a seaside stroll in Dalian and holding talks, while the official Xinhua news agency said the two leaders met on Monday and Tuesday.

It was Kim’s second visit to China since March, highlighting efforts by the Cold War-era allies to mend ties that have chilled as Beijing has supported UN sanctions over Pyongyang’s nuclear activities.

Beijing is keen to avoid being left out in the cold in the wake of Kim’s historic summit last month with South Korean President Moon Jae In and his planned meeting with Trump in June.

“After the first meeting between me and Comrade Chairman (Kim), both China-DPRK relations and the Korean peninsula situation have made positive progress. I feel happy about it,” Xi said, according to Xinhua. 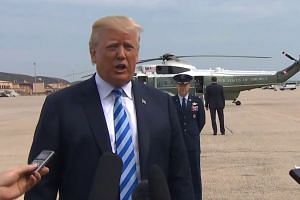 Kim was quoted as saying: “These are the positive outcomes of the historic meeting between me and Comrade General Secretary (Xi).”

Japanese media had earlier shown images of an airplane normally used by North Korean VIPs flying out of Dalian, fuelling speculation that
Kim had been in town.

​South Korea's Yonhap news agency, citing anonymous sources, said the "official" flew in a private plane and arrived at Dalian airport amid heavy security on Monday, a day before President Xi is set to attend a ceremony marking the test operation of his country's first domestically built aircraft carrier.

A series of posts on the Chinese social media site Weibo shows that security has been tightened around an airport in Dalian, with traffic in the city centre also tightly controlled.

When asked about reports of Kim visiting Xi, a spokesman for the Chinese foreign ministry Geng Shuang said earlier Tuesday he had no information on the matter.

"As there are no official announcements from China or North Korea, there is no content we can confirm now," ministry spokesman Noh Kyu Duk told reporters.

Seoul-based broadcaster KBS reported that Dalian airport was closed to the public from 8 am to 1 pm on Monday and roads around the Bangchuidao Guesthouse in the city were also closed Monday afternoon.

The guesthouse is normally reserved for foreign VIP visitors.