HONG KONG (AFP) - The optimism that once defined Hong Kong's pro-democracy rallies has been replaced by desperation and foreboding as young protesters flood the streets again, this time ready to fight in what feels like a last-ditch battle for the city.

When police cleared protesters from the centre of Hong Kong after the two-month "Umbrella Movement" occupation in 2014 calling for the right to elect the city's leader, demonstrators hung a sign from a bridge declaring: "We will be back."

This week they did just that.

On Sunday (June 9), they massed in record-breaking numbers calling for the government to scrap a deeply unpopular proposed law that would allow extraditions to China.

When the city's leaders refused, they hit the streets again on Wednesday, but this time clashing with police in unprecedented scenes of violence as officers discharged tear gas and rubber bullets during hours of running battles.

Ms Yu, a 24-year-old protester wearing a mask to hide her identity, explained how it had come to this. "Those who did 2014 know that peaceful methods are not working," she told AFP, referring to the failure of the movement back then to win any concessions from Beijing.

"Even a million go on protest and nothing happened," she added, referencing the government's refusal to be swayed by the city's largest protest since its 1997 handover to China.

But she was not keen on the confrontations either. "Violence is not working," she said. "What can I do?"

This week has seen a profound shift in the attitudes and tactics of both police and protesters. 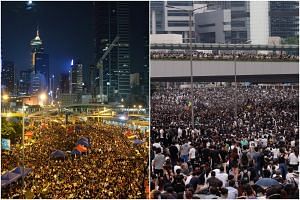 The 2014 Umbrella Movement protests - named after the umbrellas demonstrators used to defend themselves from police - were much more peaceful.

Apart from some clashes between protesters and police at the start - and occasional outbreaks of violence at night for a short period - the two-month demonstrations were a largely peaceful occupation by a movement pushing non-violent, civil disobedience.

Protesters were famously courteous, recycling their waste, doing their homework at night and apologising for the inconvenienced caused.

But the movement failed and in the years since, several protest leaders have been jailed.

Many who went into the streets this week to decry what they see as yet another erosion of their city's freedoms were also very young. But there the comparison ends with 2014.

On Wednesday, armed with bottles, bricks and metal bars, a hard core of masked protesters battled police outside the city's Parliament.

They donned helmets, masks and goggles, some of them taping thick magazines to their arms as a sort of makeshift body armour.

The police responded in kind by escalating their response in a city that had never seen rubber bullets fired before.

After seeing off the hardcore protesters outside Parliament, officers turned their crowd control weapons on the masses of largely peaceful protesters elsewhere, ensuring any occupation would end.

"The level of violence by protesters and the lethality of the weapons used by police cannot be compared to 2014," political analyst Dixon Sing told AFP.

The city's police chief has defended his officers' conduct, saying they faced a riot and mobsters.

But complaints of excessive force have flooded in, not just from protesters but also influential legal bodies and rights groups. Videos of police attacking retreating protesters, bystanders and media have also gone viral.

"I was very surprised by the use of force," said Ms Catherine, a 20-year-old communications student who was at Wednesday's protest. "There was no warning, they shot at us suddenly."

She added: "The police could choose to shoot to the sky, not on the bodies."

Mrs Ng, a 38-year-old housewife, said she attended the protest with the future of her two young children in mind and was terrified by the police response.

"I was in front, I was one of the first to be sprayed," she said. "There was no warning."

Many of those protesting spoke of a feeling of helplessness, that their protest probably would not achieve its goals but they had been left with no choice.

"I think the younger generations feel the freedoms and human rights of their own home are fundamentally threatened," said Mr Sing, the political analyst. "They see this as their last battle."

Mr Inoch, a sports teacher, said he had no illusions about the future. "I am sure (Hong Kong) will get worse," he said. "Our life will get worse, our society, our freedoms."

But he said he felt helpless. "We don't know what to do. What can we do?"