HONG KONG (AFP) - Their motto has been "Asia's Finest" since colonial times, but videos of Hong Kong police beating unarmed protesters have fuelled public anger and sparked accusations of brutality.

Police insisted the force was necessary to fend off protesters throwing bricks and metal bars.

But critics said officers used localised violence by small groups of hardcore activists to launch an unprecedented operation against the much larger mass of peaceful protesters who had taken over parts of the city on Wednesday.

Criticism of police tactics poured in Thursday as videos of the clashes went viral.

The Hong Kong Bar Association slammed the "deployment of wholly unnecessary force against largely unarmed protesters who did not appear to pose any immediate threat to the police or the public at large".

The group said the police "may well have over-stepped its lawful powers in maintaining public order".

An influential legal group on a committee that elects Hong Kong's leader called for an independent inquiry into what it said was "excessive use of force" by officers. 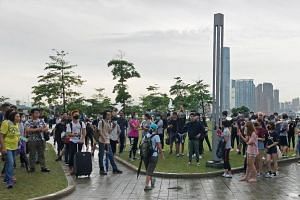 The clashes were broadcast live throughout the day on news networks, while activists have been sharing multiple clips of officers using extreme force.

In one Apple Daily clip filmed at Wednesday's protests, a young woman who falls to the floor while running away is hit by at least four riot police with batons, while one brings his plastic riot shield crashing down on her.

In another, a man sitting on a wall is approached by riot police, with whom he is seen exchanging a few words before they spray pepper repeatedly into his face at close range.

A third online clip shows several policemen slam a protester holding a box of water bottles to the ground, where several kneel on him to hold him down until he releases his phone.

"The police have taken advantage of the violent acts of a small minority as a pretext to use excessive force against the vast majority of peaceful protesters," said Mr Man-Kei Tam, director of Amnesty International Hong Kong.

"Protesters were just sitting there and demonstrating peacefully, but they used tear gas in their faces... You can only use the word hideous to describe this," lawmaker Claudia Mo told reporters.

The Hong Kong Journalists Association said it has received more than 15 complaints from reporters - including some who say they were targeted with pepper spray - and called for more witness accounts from reporters of any abuses by police.

Police chief Stephen Lo defended his officers on Wednesday, saying they had shown restraint until "mobsters" tried to storm Parliament.

"These violent protesters kept charging at our line of defence, and used very dangerous weapons, including... throwing metal barricades at us and throwing bricks," he said.

"This is a very dangerous act, it can kill people."

Several police officers were among the injured, with local TV showing one unconscious officer being carried away after appearing to have been hit by a projectile.

Two people are in a serious condition and 77 more were injured.

Compared with police in other parts of the region, Hong Kong's police have generally had a good reputation due to the territory's rule of law and open justice system.

But in recent years, anger has grown towards the force - with a key turning point being the use of tear gas against peaceful protesters, which sparked the Occupy movement of 2014.

Amnesty warned the police's tactics on Wednesday were "fuelling tensions and... likely to contribute to worsening violence, rather than end it".