HONG KONG (REUTERS) - Occupy Central is the name given to the protests that paralysed parts of Hong Kong for 79 days in late 2014.

Following are key facts about the protest and the trial.

- The so-called Occupy Central with Love and Peace civil disobedience campaign was first suggested by Benny Tai, a law professor at the University of Hong Kong, in 2013.

- Hong Kong's mini-Constitution, the Basic Law, states that both Hong Kong's leader and its legislature be elected by universal suffrage as an "ultimate aim".

- The Standing Committee of China's legislature, the National People's Congress, declared on Aug 31, 2014, that any candidate for Hong Kong's leader would have to get majority backing from an election committee stacked with pro-Beijing loyalists, as well as imposing other conditions that some in the city's opposition deemed "fake, China-style democracy". 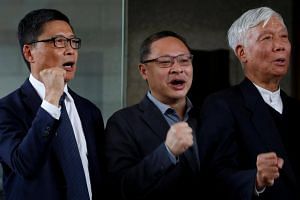 - The nomination conditions effectively made it impossible for opposition figures to get on the ballot and proved a trigger for the 2014 protests, also known as the Umbrella Revolution after the umbrellas protesters used to fend off police pepper spray, tear gas and batons.

- Nine defendants were involved in the landmark public nuisance trial, the most explicit attempt by the authorities to punish instigators of the protests.

- Others involved in the protests, including young democracy activist Joshua Wong, have been involved in other cases on charges including unlawful assembly and contempt of court, in what critics say has been the systematic persecution of the city's democratic forces.

- The authorities granted no democratic concessions.