Cathay, founded by an American and an Australian during British rule in 1946, was caught in the middle of the crisis 11 days ago, when China demanded it suspend staff involved in the protest movement.

The firm agreed, firing two pilots, but has since been plunged into turmoil after chief executive Rupert Hogg was replaced last week.

Another pilot, Mr Jeremy Tam, who is also a pro-democracy lawmaker, said on Tuesday (Aug 20) that he and others had quit the airline, as the internal political pressure was intolerable.

"That (China's aviation regulator) has reached into Hong Kong and directly pressured a local airline is undoubtedly 'white terror'," he wrote on his Facebook page, using a popular Hong Kong expression used to describe anonymous acts that create a climate of fear.

"There have been resignations from frontline staff to the company's CEO because of this political trial."

The airline confirmed Mr Tam was no longer an employee and said it could not comment on internal staff matters. China's aviation regulator has not responded to Reuters' requests for comment.

Mr Hogg's surprise exit sent a chill through the company of 27,000, according to Reuters interviews with eight staff members, as well as posts on two unauthorised but popular staff-only Facebook pages that illustrate the pressure on workers.

"There is a 'white terror' in our company," one crew member at Cathay's regional subsidiary, Cathay Dragon, told Reuters at a railway station on her way home. "We feel really scared to talk political stuff, even for chit-chat. 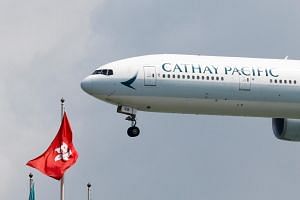 After Cathay Pacific, which Hong Kong firm is next to face Beijing's wrath?

"Some of the pro-Beijing people set up a Telegram group and post our personal information, like our addresses, phone numbers, if they discover that we support the movement on our own social media," she added, referring to use of the messenger app Telegram by both Cathay insiders and others who do not support the protests.

Mr Hogg's departure highlights the pressure on the corporate sector in Hong Kong, the Asian base for many global businesses, trying to walk a tightrope between the protesters and China's Communist Party rulers in Beijing. Demonstrations began in early June to oppose an extradition Bill and have swelled into demands, at times violent, for greater democracy for Hong Kong.

New Cathay CEO Augustus Tang told staff on Monday that the company would bounce back from recent challenges, but that there was "zero tolerance for illegal activities" or policy breaches.

"Right now, we are one of the most watched companies in Hong Kong and indeed the world," he said in a memo seen by Reuters.

"The way every single one of us acts, not only at work serving our customers but also outside work - on social media and in everyday life - impacts how we are perceived as a company."

Some Hong Kong companies with Chinese state-controlled parent firms, including Huarong International and China CITIC Bank International, advised staff to avoid flying on Cathay where possible, according to internal memos seen by Reuters.

Hong Kong returned to Chinese rule in 1997 under a "one country, two systems" formula that promised wide-ranging freedoms denied to citizens in the mainland, including an independent judiciary and freedom to protest. 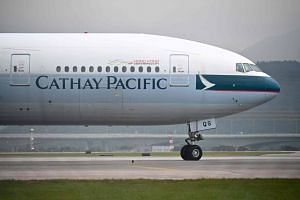 Many in the city believe Beijing has been eroding those freedoms. Protest organisers said 1.7 million people joined the most recent big anti-government protest in pouring summer rain on Sunday.

China's aviation regulator ordered Cathay on Aug 9 to provide identification of crew on mainland-bound flights and those using Chinese airspace, and to bar any involved in the protests.

Five staff members said that crews landing in China had since been subjected to intrusive inspections from regulatory officials.

"Inspectors are checking the phones of the pilots and cabin crew, going so far as to check their WhatsApp messages and photo albums to see if there are any anti-China materials," a pilot told Reuters in a text message.

The regulator did not respond to faxes seeking comment.

None of eight airline staff Reuters interviewed at and around the airport, at protests or by phone would disclose their full names for fear of losing their jobs.

Cathay fired the two pilots over their participation in the demonstrations and issued a statement afterwards saying it was fully committed to the "one country, two systems" arrangement.

One flight attendant, who spoke to Reuters by phone, said staff initially responded with anger and disappointment over the sackings. 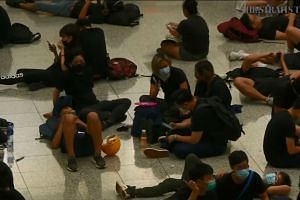 "But later on, when we saw how much a pressure the company is under from China, we are not angry anymore and we feel sympathetic," she said. "We understand it needs to please China."

Three colleagues, though, said many crew members were seeking to avoid Chinese routes, and some emphasised their fear that anything they say could be relayed to managers or to Beijing.

"If some tourists ask me about things happening in Hong Kong, I will only tell him some factual information, being neutral," one flight attendant said.

"I don't want somebody to use it as an excuse to complain about me - Chinese tourists are everywhere."

Of the dozens of Cathay staffers approached for interview in recent weeks, including at random outside the airport and its Cathay City headquarters, none who was willing to speak with Reuters said they backed the actions of Beijing.

Two employee Facebook pages, CX Secrets and KA Secrets, named for the airline codes of Cathay and Cathay Dragon and once a forum for complaints about roster changes and coffee machines, are now flooded with messages debating the handling of the crisis.

Most are pleading for loyalty and silence.

"Cathay's today is Hong Kong's tomorrow. In order to secure this job, (we have to) be silent and continue compromising," one post said.

Others framed solidarity as a form of defiance.

"The company has to bend over to survive unfortunately, but we don't have to," wrote one Facebook poster.