BEIJING (REUTERS) - China on Friday (May 24) accused US officials of lying to the public about their trade war, as rising tensions between the world's two largest economies kept financial markets in a state of unease.

Talks to end the trade dispute collapsed earlier this month, with the two sides in a stalemate over US demands that China change its policies to address a number of key US grievances, including theft of intellectual property and subsidies for state enterprises.

"Domestically in the United States there are more and more doubts about the trade war the US side has provoked with China, the market turmoil caused by the technology war and blocked industrial cooperation," Chinese Foreign Ministry spokesman Lu Kang said.

US officials "fabricate lies to try to mislead the American people, and now they are trying to incite ideological opposition," he said, when asked about US Secretary of State Mike Pompeo's recent criticism of Huawei.

In an interview with CNBC on Thursday, Pompeo said Huawei was connected to the Chinese government, dismissing Huawei chief executive Ren Zhengfei's assertions that his company would never share user secrets.

"The company is deeply tied not only to China but to the Chinese Communist Party. And that connectivity, the existence of those connections puts American information that crosses those networks at risk," Pompeo said. 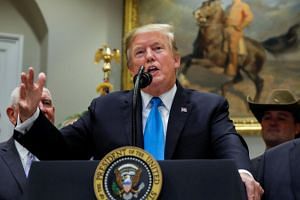 The Big Story: How the US-China trade war affects you

Huawei has repeatedly denied it is controlled by the Chinese government, military or intelligence services.

Pompeo said he believed more American companies would cut ties with the tech giant, while the United States has been rallying its allies to persuade them not to use Huawei for their 5G networks.

US President Donald Trump said on Thursday that US complaints against Huawei might be resolved within the framework of a US-China trade deal, while at the same time calling the Chinese company "very dangerous." Lu said he did not know what Trump was talking about.

"Frankly, I'm actually not sure what the specific meaning of the US leader, the US side, saying this is," he said.

World equity markets rebounded on Friday from heavy selling in the previous day's session. The US dollar was trading lower against a basket of currencies and prices of safe-haven US government debt fell.

With no further talks between Washington and Beijing scheduled, investors are nervously eyeing the prospect of an escalation in the tit-for-tat tariffs the two countries have slapped on each other's products.

The seeds of the current impasse were sowed when Chinese officials sought major changes to the draft text of a deal that the Trump administration says had been largely agreed.

Trump, who has embraced protectionism as part of an "America First" agenda, has threatened to slap tariffs of up to 25per cent on an additional list of Chinese imports worth about US$300 billion.

Meanwhile, China's move to impose higher tariffs on a revised US$60 billion list of US goods is set to go into effect on June 1.

Financial markets fear the trade war could badly damage global supply lines and prompt a further slowdown of the world economy. Economists say the tariffs will curb growth in the United States and China, two of the more solid economies.

China can maintain healthy, sustainable economic growth even as it suffers some impact from the trade friction, a senior official from China's state planner told state television on Friday.

"China's healthy, steady and sustainable growth can be maintained in the medium- and long-term," said Ning Jizhe, vice chairman of the National Development and Reform Commission.

The Trump administration says it is monitoring any possible impact of tariffs on US consumers. It also announced this week a new aid package of about US$15 billion to help US farmers, exceeding the up to US$12 billion that was rolled out last year.

American farmers, a key Trump constituency, have been among the hardest hit in the trade war. Soybeans are the most valuable US farm export, and shipments to China dropped to a 16-year low in 2018.