PALM BEACH, Florida - It was a crucial first summit between the presidents of the United States and China, closely watched for signs of the future direction of their bilateral relations, chemistry between the leaders, protocol for the Chinese guests and even the choice of attire by the First Ladies.

Here's a quick round-up of the highlights of the summit between President Donald Trump and his Chinese counterpart Xi Jinping at the Mar-a-Lago resort on April 6-7:

Political watchers said this was the biggest achievement at the summit.

"We have engaged in deeper understanding and have built a trust," Mr Xi said. "I believe we will keep developing in a stable way to form friendly relations....For the peace and stability of the world, we will also fulfill our historical responsibility."

In a departure from his trademark anti-China rhetoric, Mr Trump replied: "Well, I agree with you 100 per cent."

As the two delegations huddled for talks, Mr Trump told reporters "we have made tremendous progress in our relationship with China." He added: "The relationship developed by President Xi and myself I think is outstanding... And I believe a lot of very potentially bad problems will be going away."

The two leaders also took a walk around the manicured grounds of Mr Trump's lavish Spanish-style resort. The US president could be seen chatting and gesturing to his Chinese counterpart, who did the same.

"Both the atmosphere and the chemistry between the two leaders were positive, the posture between the two really set the tone," said Secretary of State Rex Tillerson. "All of us are feeling very good about the results of this summit."

The official China Daily reported that both parties appeared "equally enthusiastic about the constructive relationship they have promised to cultivate". 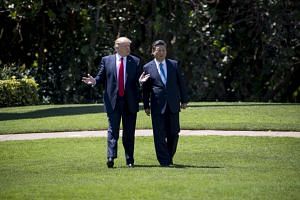 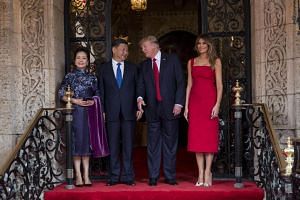 Trump-Xi summit: Top accomplishment is getting to know each other

The bonhomie extended behind closed doors, where Mr Trump's granddaughter Arabella and grandson Joseph, aged five and three, sang a traditional Chinese ballad "Jasmine Flower" to Mr Xi and his wife Peng Liyuan, and recited poetry in Mandarin, earning praise from their very proud mother Ivanka. She tweeted: "Very proud of Arabella and Joseph for their performance in honor of President Xi Jinping and Madame Peng Liyuan's official visit to the United States."

US STRIKE ON SYRIA OVERSHADOWS SUMMIT

Mr Trump upended the summit by ordering the launch of cruise missiles at Syrian targets on April 6, just before Mr Xi's arrival in Florida. It was his first military strike on a state target - Syria. His decision was in response to a chemical attack on April 4 launched by President Bashar al-Assad's regime in rebel-held town Khan Sheikhun, which killed 86 people including 27 children.

Mr Trump personally informed Mr Xi of the strikes as their dinner concluded on the first night of the summit. That's when 59 Tomahawk missiles were winding their way to the Shayrat airbase in Syria.

The Chinese president was not rattled by Mr Trump's decision to strike Syria, the US secretary of state said. "President Xi expressed an appreciation for the president letting him know and providing the rationale and said, as it was told to me, he understood that such a response is necessary when people are killing children."

Some observers, however, said the US missile attack unravelled Beijing's well laid plans to present Mr Xi as a global leader on par with Mr Trump.

Both leaders agreed on a 100-day plan for trade talks aimed at boosting US exports and reducing China's trade surplus with the US, but revealed little detail on the plan.

In return, Mr Xi hoped to obtain assurances from Mr Trump on punitive tariffs and the delay of an American arms sale to Taiwan, at least until after a major Communist Party meeting later this year. Five of the ruling party's seven most powerful leaders might be replaced at the 19th Party Congress, along with scores of other senior positions. The horse-trading is already underway among party factions.

Commerce Secretary Wilbur Ross said the Chinese had expressed interest in reducing China's trade surplus as a way of controlling their own inflation. "That's the first time I've heard them say that in a bilateral context," he said.

The two presidents appeared to have achieved little in the way of concrete agreements. "We had a long discussion already. So far, I have gotten nothing. Absolutely nothing," Mr Donald said to laughter from the delegation on the first day of the talks. At the close of the summit, there was still a lack of anything substantial.

On North Korea, an issue where the two leaders have different positions, Mr Xi agreed to increase cooperation in reining in Pyongyang's missile and nuclear programs. But he did not offer any new formula for cracking the North's defiant attitude.

In an interview with the Financial Times before the summit, Mr Trump said he was prepared to take unilateral action against North Korea if China did not cooperate with the US goal of curbing the North's nuclear weapons program. But Beijing is hesitant to take any drastic measure against Pyongyang, such as totally cutting off oil supply and trade with the North, which could destablise the regime.

In a sign that rough spots remain, Mr Tillerson described the discussions as "very frank and candid." He said: "President Trump and President Xi agreed to work in concert to expand areas of cooperation while managing differences based on mutual respect."

The First Ladies of both countries brought their fashion A game to the meetings, with Ms Peng donning gowns inspired by traditional Chinese designs and Mrs Trump wearing a series of chic dresses.

Mrs Trump favoured sleeveless dresses, donning a red US$3933 (S$5,500) Valentino frock for her appearance at her husband's Mar-a-Lago resort in Florida.

Ms Peng, on the other hand, was the picture of elegance in a contemporary qipao with a velvet shawl.

Before Mr Trump became president, he once said he would get Mr Xi a McDonald's hamburger instead of hosting him to a lavish state dinner if he were the US President.

But on the first night of their meeting, Mr Trump offered the Chinese leader more than a burger, though the meal was not a full-fledged, official state dinner. The guests were given a choice of two main courses: pan-seared Dover sole or prime New York strip steak.