BEIJING (NYTIMES) - The missiles were being prepared even before the two men finished dinner, disrupting the carefully choreographed proceedings.

The US attack on Syria on Thursday (April 6) unravelled China's well laid plans for a summit meeting that would present President Xi Jinping as a global leader on par with President Donald Trump, at once stealing the spotlight from Xi and putting him in a difficult position: choosing between condoning the kind of unilateral military action that China has long opposed, or rebuking his host.

Xi's dilemma was also acute because China has generally sided with Russia in defending Syria's President Bashar al-Assad, and because it worries that Trump might be prepared to order a similar strike on North Korea, Chinese and Western analysts said.

"Xi can't fail to be impressed by Trump's resolve," said Alan Dupont, an Australian military analyst who worked for that country's Defence Department. "Xi will have to reassess what the Trump presidency means for Chinese interests in East Asia, particularly North Korea and the South China Sea."

The US strikes on Syria would quite likely make Xi be more amenable about the White House's demand that China squeeze North Korea's economy, analysts said. 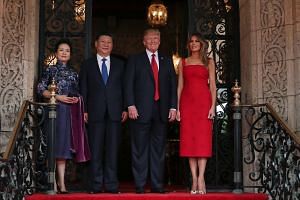 First Trump-Xi meeting gets off to a cordial start 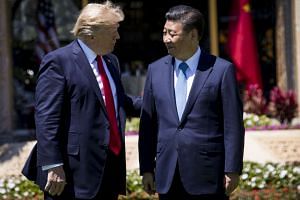 "I suspect Xi will treat Trump's threat against North Korea as more serious than before this, provided the behind-the-scenes body language does not counteract it," said Douglas H. Paal, vice-president for studies at the Carnegie Endowment for International Peace.

Beijing has long been fairly confident that the United States would not risk an attack on North Korea, a much more dangerous target than Syria because of its nuclear arsenal and its capacity to hit Japan and South Korea, two US allies, Chinese analysts said.

But China's leaders are still trying to figure out Trump, and his quick decision to strike Syria may cause them to reconsider that assumption.

At the same time, analysts said, China is unlikely to abandon North Korea as an ally and a strategic asset because it does not want to see a unified Korean Peninsula dominated by US troops.

The first evening between Xi and Trump looked warm and welcoming on Chinese state-run television, with lavish photographs of them chatting informally on an elegant sofa at Mar-a-Lago, Trump's Florida club.

The news shows also broadcast images of the two leaders sitting side by side at a vast dining table set with candelabra, and of Trump's 5-year-old granddaughter Arabella singing in Chinese to Xi and his wife Peng Liyuan before dinner.

The Chinese reports approvingly noted that the granddaughter did a three-part performance, singing a Chinese song, "Jasmine," and reciting the "Three Character Classic" and some Tang poetry.

Trump accepted Xi's invitation to visit China at an "early date," the state-run news agency Xinhua reported, a gesture that showed the two men had established the rapport that the Chinese leader was seeking to show his people at home.

Then after dinner, with Xi safely back at his nearby hotel, Trump stepped to a podium to announce the strikes, making comments punctuated with emotional descriptions of the children killed by the Syrian government's chemical weapons attack.

Trump informed Xi of the attack during dinner, Secretary of State Rex Tillerson said in remarks to the news media on Friday afternoon.

At the Foreign Ministry in Beijing on Friday, spokesman Hua Chunying noted China's opposition to the use of chemical weapons and added that it was necessary to seek a political solution in Syria.

"It is imperative to prevent the further deterioration of the situation," she said.

China has maintained a long-standing policy opposing unilateral military action. But Trump's decision to order the strikes at the very moment Xi was visiting inevitably put the focus on North Korea.

In an interview last weekend before the talks with Xi, Trump told The Financial Times that he was prepared to take unilateral action against North Korea if China did not cooperate with the US goal of curbing the North's nuclear weapons program. Trump did not specify what kind of action he was considering.

During his trip to East Asia last month, Tillerson said the United States might be forced to take pre-emptive military action if the North Koreans "elevate the threat of their weapons program" to an unacceptable level.

Despite Trump's action against Syria in the middle of Xi's visit, there was not an exact parallel between Syria and North Korea, said Jin Qiangyi, director of the Centre for North and South Korea Studies at Yanbian University in Jilin province, which borders North Korea.

Syria does not have the capacity to hit back after the missile strikes, but North Korea, with its arsenal of weaponry and its nuclear program, does, Jin said.

"The North's nuclear capacity has reached such a level that any unilateral action from the US would be extremely difficult," he said. "The Americans have been saying a lot recently about attacking North Korea, but it is us who will be suffering from the consequences."

The north-east area of China where Jin teaches has become increasingly fearful of radiation leaks from North Korea's nuclear operations. An attack by the United States would be "catastrophic for the region," he said.

Another consequence for China of the Syrian attack could be an increase in the disaffection for North Korea among the population, and among those in the government and think tanks that consider the North a strategic liability.

Beijing believes that the leader of North Korea, Kim Jong Un, is insurance against a unified Korean Peninsula dominated by the US military.

But a quiet debate has grown inside the Chinese government over the wisdom of hanging onto North Korea, an increasingly troublesome ally that functions because of China's largesse.

China supplies North Korea with almost all of the oil needed to keep its bare-bones economy afloat, and 90 per cent of North Korean trade passes through China. Some Chinese companies trade with North Korea in contravention of UN sanctions.

The White House is trying to persuade China that its support for the North is counterproductive, an argument that Trump was prepared to make to Xi during their talks, a senior administration official told reporters before the meeting.

The Syrian strike could serve to make that point, but it would not be definitive in changing China's strategic thinking, said Andrei Lankov, a historian of North Korea who visits China.

"Yes, North Korea is a liability for China," he said. "But in the real world, the status quo is the least unpleasant option."

If the talks with Trump on Friday go badly, Xi will be able to use the Syrian airstrikes against the US president by telling the Chinese people that they were the action of a weak leader, some Chinese analysts said.

"Trump is frustrated with his own critics," said Shi Yinhong, professor of international relations at Renmin University.

"This airstrike was a defensive measure to deal with criticism against him. The message from Xi to the Chinese public could be: 'This is Trump, you know he is not so good for China.'"