PALM BEACH, Florida - While their husbands huddled in talks at the Mar-a-Lago resort, the wives of President Donald Trump and Chinese President Xi Jinping visited an art school in Palm Beach on Friday (April 7).

Peng Liyuan, a former singing star in the People's Liberation Army (PLA), and Melania Trump, a former model, toured the Bak Middle School of the Arts and went from classroom to classroom meeting students and teachers.

They were greeted by 7th and 8th grade girls who put up a musical performance, and joined classes in symphonic band, orchestra where they were treated to a recital of Bach's "Air", and civics, CBS News reported.

In one class, the Chinese first lady was asked about her experience in the arts and was presented with a student's painting as souvenir, Xinhua news agency said.

Peng was quoted as saying she hopes the teachers and students of Bak Middle School of the Arts will make greater contribution in strengthening bilateral ties and friendship between China and the US through education and the arts. 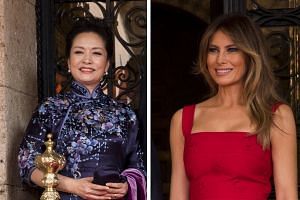 The Chinese first lady, affectionately known as "Mother Peng" in China, has become a regular feature of China's global outreach since her husband took the reins of state in 2013.

With a smile on her face, dressed in a simple black peacoat and carrying an elegant unbranded bag, Peng stepped into the international limelight in Russia in March 2013 on Xi's first foreign trip as president, becoming an instant internet sensation and style trendsetter back home, Reuters reported.

Since then, she has named pandas with then-US First Lady Michelle Obama, made friends with orphans in Zimbabwe and sat with Costa Rican children on her lap.

Peng's career as a darling of China's military choir made her a household name in China long before her husband, with appearances on the state-broadcaster's New Year Gala and other popular TV shows propelling her to stardom in the 1980s and 1990s.

She retains the rank of Major General in the People's Liberation Army and is dean of the army's Arts Academy. In the eyes of many Chinese, Peng embodies a broadly-appealing patriotism blended with China's classical virtues, thanks to her army career and her pedigree musical training, according to Reuters.