WASHINGTON - President Donald Trump signalled that the United States could stomach higher tariffs on Chinese goods and would not back down in its trade war with China, even as he said that a trade deal was still possible this week.

"I'm different than a lot of people. I happen to think that tariffs for our country are very powerful," Mr Trump told reporters on Thursday afternoon (May 9), hours before higher tariffs on US$200 billion of Chinese goods took effect.

America's latest moves in the trade war, including ramping up pressure on China to keep to terms of an agreement it said negotiators had agreed to, underscored the tight position Beijing is in.

While it cannot be seen at home to be bowing to American pressure, it also wants an end to the tariffs that are dragging down the already slowing Chinese economy.

"It was their idea to come back," said Mr Trump. He pointed to the willingness of the Chinese negotiating team to come to the table - despite earlier reports that they would pull out of talks - as a sign that a trade deal was still possible this week.

"It's possible to do it. They're all here," he said, adding that even Chinese vice premier and lead negotiator Liu He would be present.

Mr Trump added that he received a "very beautiful letter" from Chinese president Xi Jinping, urging both sides to work together and get something done. 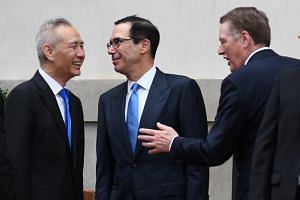 Possibility of current round of talks yielding trade deal all but gone, say Chinese experts

But he said he would not stand for China renegotiating a deal, and insisted that America would not continue to be taken advantage of.

"We were getting very close to a deal, and then they started to renegotiate the deal. We can't have that," he said. "Whether it's intellectual property theft, they took many, many parts of that deal and they renegotiated. You can't do that."

He added: "What I'm doing now with China should've happened many years ago."

Washington has been remarkably united behind Mr Trump's hardline approach in recent days.

Initial misgivings over a unilateral escalation of the trade war gave way to support as reports emerged that China backtracked on previous commitments, which US Trade Representative Robert Lighthizer and Treasury Secretary Steven Mnuchin confirmed in an unusual media briefing on Monday.

Both men then had a working dinner with Mr Liu, and agreed to continue discussions on Friday morning.

Economists, however, vigorously dispute Mr Trump's repeated claims that China is filling America's coffers by paying for the tariffs. They said the levies are taxes which American importers pay on Chinese goods, and that domestic prices have increased and hurt consumers as a result.

Mr Trump repeated the claims again in a series of Friday morning posts on Twitter.

He also floated an idea that the US would use the revenue generated from tariffs to buy agricultural products from American farmers "and ship it to poor and starving countries in the form of humanitarian assistance".

"Tariffs will bring in far more wealth to our country than even a phenomenal deal of the traditional kind. Also, much easier and quicker to do. Our farmers will do better, faster, and starving nations can now be helped. Waivers on some products will be granted, or go to new source," Mr Trump said on Twitter.

But his proposal alarmed economists, with Peterson Institute for International Economics senior fellow Chad Bown posting on Twitter that the farm dumping programme would devastate farmers in poor countries and hurt those in allies such as Australia and Canada.

"Furthermore, a lot of the farm products previously exported to China, such as US$14 billion per year of soybeans, cannot simply be re-purposed for human food consumption in famine-stricken countries. Right now, the soybeans sold to China are used to feed livestock, not people," added Dr Bown, who was in the White House Council of Economic Advisers in the Obama administration.