WASHINGTON - Top American and Chinese trade negotiators resumed talks in the US capital on Friday (May 10), just hours after Washington raised tariffs on US$200 billion (S$273 billion) worth of Chinese goods and with Beijing’s threat of countermeasures looming.

The United States went ahead with the hike, increasing tariffs by 15 percentage points to 25 per cent at 12.01am on Friday in the US, after the first day of trade talks failed to yield an unlikely breakthrough.

Since Sunday, President Donald Trump and his trade officials have accused China of walking back on its promises made in previous rounds of talks.

China maintains it has acted in good faith but vowed to take the necessary countermeasures to the US tariff hike, without elaborating.

Chinese Vice-Premier and lead negotiator Liu He came to Washington despite fears that he might cancel following Mr Trump’s tariff threat.

“I make this trip against the pressure because we want to show our greatest sincerity,” he told Chinese state media after arriving in Washington on Thursday.

“We also want to resolve some of our differences honestly, confidently and rationally. I believe there is hope,” said Mr Liu, who had a working dinner with US Trade Representative Robert Lighthizer and Treasury Secretary Steven Mnuchin that night. 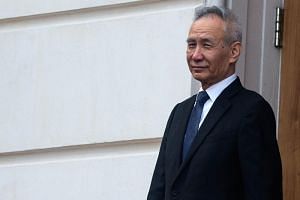 Possibility of current round of talks yielding trade deal all but gone, say Chinese experts

Mr Trump said the second day of talks with China continued “in a very congenial manner” as he signalled that the US was prepared to settle in for the long haul.

“There is absolutely no need to rush,” he said.

“Tariffs will make our country much stronger, not weaker. Just sit back and watch! In the meantime, China should not renegotiate deals with the US at the last minute,” he wrote in a string of posts on Twitter.

The new 25 per cent tariffs cover a wide range of Chinese goods but will hit electrical machinery, appliances and furniture the hardest.

They apply to goods leaving China and entering the US after 12.01am yesterday. While cargo transported by plane will be affected immediately, goods already en route to the US by ship will be taxed the original 10 per cent rate if they arrive by June 1.

This gives negotiators an unofficial grace period of a few more weeks to reach an agreement before importers feel a fresh wave of pain.

Markets were volatile but Asian markets largely finished higher on Friday, with Chinese stocks rallying shortly after the US raised tariffs.

All eyes are now on how China will retaliate.

Its original plan when the US first proposed the 25 per cent tariff hike last year was to raise its own tariffs on US$110 billion worth of American goods to 25 per cent as well.

Mr Trump has threatened fresh tariffs on another US$325 billion worth of Chinese goods, which would cover almost all Chinese exports to the US.

But China is running out of goods to tax.

It imports far less from the US than it exports, and has only US$10 billion worth of American imports left untaxed.

The 10-month trade war between the world’s two biggest economies had looked to be almost over last week, with officials signalling that a deal was near. But the latest developments show that the two sides remain far apart on many issues.