NEW YORK (NYTIMES) - The van Gogh and the Monet are safely in storage in Switzerland. The Oscar that once belonged to Marlon Brando is in a federal warehouse in Texas. Those were easy enough to corral.

But when the US$250 million (S$342 million) yacht was finally captured in Bali, the US government couldn't let it bob in the water unattended, so it had to pay for a crew. The US$35 million Bombardier jet has been grounded, but it needed an engine test costing up to US$25,000.

And no one is quite sure what to do with the see-through grand piano now sitting in a supermodel's Malibu home. It won't fit through the door.

All of the items, and many more, had been bought by flamboyant Malaysian financier Low Taek Jho, also known as Jho Low, who prosecutors say helped siphon billions of dollars from Malaysian government investment fund 1Malaysia Development Berhad (1MDB), then went on a colossal spending spree.

It is one of the largest international kleptocracy cases the United States has ever pursued.

It is so expansive that just tracking down, retrieving and maintaining the loot has become a complex multinational operation in itself.

Court documents and interviews describe a recovery effort that involves half a dozen federal agencies, a bevy of contractors and investigators in countries including Switzerland, Luxembourg and Malaysia. 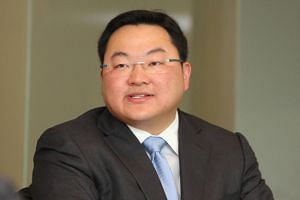 Its targets include more than a dozen properties in New York, California and London, including a US$31 million condominium in the Time Warner Centre in Manhattan, the Viceroy L'Ermitage Beverly Hills hotel and a US$17.5 million mansion in Beverly Hills that came with a gold-tipped pyramid floating in a reflecting pool.

The process has been slowed because of the pending criminal case, which itself is lagging because Low, 37, is a fugitive believed to be hiding in China. There are also thorny legal issues because Low and some of the other defendants have denied wrongdoing and are challenging the forfeitures.

Several of the items are owned by trusts, and Low "does not consider it proper for any government to seize property belonging to the trusts or himself", said Mr Robin Rathmell, Low's lawyer.

The US took the lead in the investigation because it has been cracking down on the flow of illegal money through the US financial system, and because, until a few months ago, Malaysia's own government was being run by the very people accused of ripping it off.

The fund at the centre of the investigation, 1MDB, was supposed to benefit ordinary Malaysians. It raised billions of dollars from banks and borrowed from investors, ostensibly to finance projects like a joint venture with a Saudi oil company and the purchase of power plants.

But prosecutors say 1MDB became a "massive, brazen and blatant" money-laundering scheme, in which billions were diverted into the bank accounts of senior officials, including former prime minister Najib Razak, his family and associates, and Low.

The scandal led to the ouster of Najib. It also has ensnarled Goldman Sachs, which helped 1MDB raise money; a Justice Department employee who pleaded guilty to helping Low funnel money into the US; and Mr Elliott Broidy, a top fund raiser for President Donald Trump who was paid to lobby the administration to stop the investigation. (Mr Broidy is not accused of any crime.)

But the idea was simple: Use 1MDB as a vehicle to draw in big money.

And then spend it.

Some US$200 million was used to buy artwork. There was a 22-carat pink diamond necklace worth US$27.3 million, said to have been given to Najib's wife. (Her lawyers say that while she saw the necklace, which has gone missing, she never actually received it.)

Tens of millions of dollars went towards financing Hollywood films including The Wolf Of Wall Street and Daddy's Home through a production studio called Red Granite Pictures, which was owned by Mr Riza Aziz, Najib's stepson. Red Granite has settled with the government for US$60 million without admitting wrongdoing.

A quarter billion was spent on a custom-built mega-yacht, called the Equanimity, with a movie theatre, helicopter pad and enough space for dozens of crew members. Indonesian authorities said the boat's transponder was turned off at times, making it difficult for the FBI to track it. The yacht was finally seized in Bali this year.

The US then staffed it with a crew until it was turned over to Malaysia's custody.

Low, who had a self-proclaimed taste for the very finest things, also used some of the money to lavish gifts on celebrities like actor Leonardo DiCaprio and Australian supermodel Miranda Kerr, prosecutors say.

In 2014, Low bought the clear-acrylic grand piano from Crystal Music Co in the Netherlands and had it delivered to Ms Kerr in Malibu. Mr Peter Tol, the company's founder, declined to discuss the price but said that his custom pieces now cost from US$170,000 to upward of US$1 million.

It has been a centrepiece of Ms Kerr's home. She has been photographed lounging on its lid in a Giorgio Armani gown and has been recorded tapping out a simple song called The Flea Waltz.

Mr Mark Fabiani, a lawyer for Ms Kerr, said she is happy to relinquish the piano. But it's not clear that it is worth the effort to get it out.

"If you move it, you might damage it, and then you have to restore it," said Mr Michael Case, the asset forfeiture coordinator for the US Marshals Service in Manhattan, speaking generally about such operations.

This extraction would be especially complicated.

When Mr Tol delivered the piano, he was horrified to learn it would be left on an outdoor deck, protected only by an overhang.

"This was hurting my soul very much," he said. "I strongly advised them to close that area."

Ms Kerr followed his advice. But those new walls are a problem for the government, which believes it would have to do some demolition to get the piano out, according to two people with knowledge of the investigation who were not authorised to speak publicly. Then a very expensive house would have to be repaired.

So for now, the piano stays.

Other tokens of Low's esteem have been easier to retrieve. Ms Kerr handed over a substantial amount of jewellery, including a 11.71-carat heart-shaped diamond and a pair of 11-carat diamond earrings.

Mr DiCaprio, too, has relinquished his gifts, including Picasso's "Nature Morte au Crâne de Taureau" (Still Life With Bull's Head) and a collage called "Redman One" by Jean-Michel Basquiat, both of which he had stored in Switzerland.

He also gave up Brando's 1954 Oscar for On The Waterfront. According to Billion Dollar Whale, a book about Low by two Wall Street Journal reporters, the statue had disappeared from Brando's Hollywood home; Low bought it for US$600,000 from a film memorabilia dealer. Unfortunately for the government, when any post-1950 Oscar is put up for sale, the Academy of Motion Picture Arts and Sciences has the right to buy it for US$1, a spokeswoman for the academy said.

In Malaysia itself, the haul has been immense.

Just days after Najib was voted out, police raided six residences connected to him. They seized 35 bags of cash in 26 currencies, and it took 22 officers three days to determine their full value - about US$30 million. There were bags of gold (25), Hermes handbags (272) and watches (423). Everything is being stored in Kuala Lumpur at the Malaysian central bank.

"The numbers were just too huge for us to do the accounting on the premises," said Mr Amar Singh, who led the asset seizures for the Royal Malaysian Police.

Najib has denied wrongdoing, and Mr Farhan Shafee, a member of his legal team, said: "As far as we can see and as far as the documents provided show, the assets that were seized have nothing to do with the charges that have been brought."

As for Mr Tol, the piano maker, he said he felt terrible if he had unwittingly accepted money "destined for the normal people of Malaysia".

Ms Vickey Barron, a real estate broker who sold a US$51 million penthouse in New York City's Chelsea neighbourhood to another man later implicated in the 1MDB case, Khadem al-Qubaisi, recalled the transaction as a blur. (Al-Qubaisi has been jailed in Abu Dhabi since 2016, making it difficult to defend himself, his lawyer said.)

An entourage of about half a dozen people had zipped through a tour of the apartment, and within a day, a representative called to say they would take it.

She called it one of the strangest deals she'd ever done. "I take longer to buy a pair of sneakers," she said, "than he took to buy the apartment."