KUALA LUMPUR (THE STAR/ASIA NEWS NETWORK) - The Equanimity super-yacht that allegedly once belonged to fugitive businessman Low Taek Jho will be sold with a nine-digit price tag before March 31, according to 1Malaysia Development Bhd (1MDB) lawyer Sitpah Selvaratnam.

Ms Sitpah said the Sheriff of the Admiralty Court would be seeking the necessary orders from court to commence the second phase of the judicial sale by private treaty for closing the sale no later than March 31.

"The nine-digit asking price will be available on application, once approval of court is obtained, and will be commensurate with a 4½-year-old Oceanco-built luxury yacht, with the specifications of the Equanimity as she lies," she said in a statement.

Ms Sitpah said the Sheriff has now considered various aspects of the offers received at the closing of the submission of bids on Nov 28.

She said the Sheriff believed that going ahead with the second stage of the judicial sale process will help secure the optimum value for the Equanimity.

Ms Sitpah and her team of lawyers and Senior Federal Counsel Alice Loke, who acted for the government, were present before High Court (Admiralty Court) Judicial Commissioner Khadijah Idris during proceedings in the chambers on Wednesday (Dec 5). 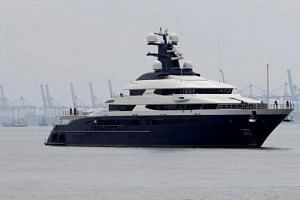 The bidding process for the super-yacht began on Oct 29 and ended on Nov 28.

The judgment came after its registered owner failed to appear in court to claim the vessel.

Besides 1MDB and the government, the other two plaintiffs are 1MDB Energy Holdings Limited and 1MDB Global Investment Limited, which are 1MDB subsidiaries.

On Oct 5, the same court granted an application by the four plaintiffs to appoint a central broker and an international appraiser to handle the sale of the Equanimity, which purportedly belongs Low, also known as Jho Low.

In the application filed on Aug 23, the four plaintiffs named the owner of the ship, Equanimity of Cayman Islands, as the defendant in a suit filed via the law firm of Jeremy Joseph and Partners.

In the notice of application, the four plaintiffs asked for the sale of the ship, bunkers, fuel, lubricants and other consumables on board to be conducted via public tender or private treaty by the Admiralty Court sheriff.

The super-yacht was brought to Port Klang on Aug 7 after the Indonesian authorities handed it over to Malaysia.

It had been seized off Bali in February at the request of the US authorities as part of the corruption investigation into 1MDB launched by the US Department of Justice.