WASHINGTON (REUTERS) - Senior United States (US) and Chinese officials are poised to start another round of trade talks in Beijing next week to push for a deal to protect American intellectual property and avert a March 2 increase in US tariffs on Chinese goods.

US Treasury Secretary Steven Mnuchin said in an interview with CNBC on Wednesday (Feb 6) that he and other US officials will travel to Beijing next week for the talks with Chinese officials.

Two people familiar with the plans told Reuters earlier on Tuesday the US delegation would begin arriving in Beijing over the weekend, following a Chinese New Year break this week.

Dow Jones had reported that the talks next week would be led by Mr Mnuchin and US Trade Representative Robert Lighthizer. Mr Lighthizer had said after concluding a round of US-China talks last week that he and Mnuchin would be leading a team to Beijing early this month for more negotiations, but the timing was uncertain.

US President Donald Trump said in his State of the Union address on Tuesday that any new trade deal with China “must include real, structural change to end unfair trade practices, reduce our chronic trade deficit and protect American jobs."

A USTR spokeswoman declined comment on any plans for talks. A Treasury Department spokesman could not be immediately reached for comment.

Dow Jones also said that China has agreed to widen the trade discussions to include cyber hacking and that US President Donald Trump had not yet decided whether to meet with Chinese President Xi Jinping on the trade dispute.

The talks have centered on addressing US demands for deep structural changes to China's economic and trade policies, including new protections for US intellectual property, ending forced technology transfers, reining in China's subsidies for state industries and increasing Chinese purchases of US farm, energy and manufactured products. 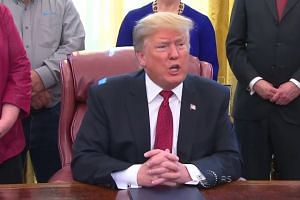 Mr Trump said he would be willing to meet with Mr Xi to try seal a comprehensive trade deal, but Mr Lighthizer said Mr Trump would decide on the meeting based on progress in the talks.

Mr Trump has vowed to increase tariffs on US$200 billion (S$270 billion) worth of Chinese imports to 25 percent from 10 per cent currently if the two sides cannot reach a deal by 12.01am (1.01pm Singapore time) on March 2.

Mr Trump, speaking at the White House last week during a meeting with Chinese Vice Premier Liu He, said he was optimistic that the world's two largest economies could reach "the biggest deal ever made."

The Chinese trade delegation said in a statement that the talks had made "important progress," China's official Xinhua news agency reported.