Big progress made on thorny issues; Trump says he will meet Xi to seal an agreement

The United States and China are optimistic about the progress made in the high-level trade talks in Washington which ended on Thursday, raising hopes that despite the need for more work, a deal to end their trade war could be reached before stiffer tariffs kick in on March 2.

US President Donald Trump said he would meet Chinese President Xi Jinping, potentially more than once, to seal a deal.

Mr Trump added that he could combine it with his trip to meet North Korean leader Kim Jong Un in end-February.

"Tremendous progress" had been made on the thorny issue of forced technology transfers, said Mr Trump, who welcomed China's purchase of five million tonnes of soya beans as a sign of good faith.

Beijing likewise welcomed the "important progress" made, saying that the talks were frank, specific and constructive.

Both sides had set a timeline and road map for the next step of talks, state news agency Xinhua said after the talks ended on Thursday.

They also appeared to have made progress on the key US concern of enforcement of any deal, with US Trade Representative Robert Lighthizer telling reporters before a closed-door meeting with Chinese Vice-Premier Liu He: "Both sides agree this agreement is worth nothing without enforcement."

Xinhua also reported that both sides agreed on the importance of constructing a two-way mechanism for implementing the deal, which will help ensure the measures from the talks are put in place and effective.

The two-day talks covered a wide range of issues, including ways in which US firms are pressured to transfer technology to Chinese companies, the need for stronger protection and enforcement of intellectual property rights in China, and the harm resulting from China's cyber theft of US commercial property, the White House said in a statement. 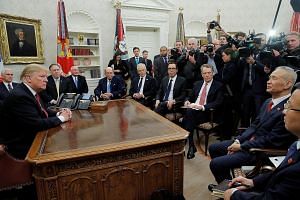 It also cited, among others, barriers US firms face in China and the need to remove market barriers and tariffs that limit US sales of manufactured goods, services and agriculture to China. "The purchase of US products by China from our farmers, ranchers, manufacturers and businesses is a critical part of the negotiations," said the White House.

Mr Trump said there had been no talk of extending the March 1 deadline for an agreement, failing which the US would raise tariffs from 10 per cent to 25 per cent on US$200 billion (S$270 billion) worth of Chinese goods on March 2.

"We are going to have a great trade deal with China if it all works out… It is going to be great for both countries," he told reporters before a closed-door meeting with Mr Liu, who led the China delegation.

Mr Liu delivered a letter from Mr Xi to Mr Trump, in which the Chinese leader said he hoped both sides would continue to act in a spirit of mutual respect and win-win cooperation, and meet each other halfway for an early deal that was in both their interests.

The Chinese proposed a Trump-Xi meeting in the southern Chinese island of Hainan, The Wall Street Journal reported. Milken Institute Centre for Regional Economics' executive director Kevin Klowden told The Straits Times that a more tangible agreement, with very clear deliverables which China finds acceptable, could come next. "There is going to be a major push by the White House in the meanwhile to come up with language that both sides can agree to when they meet in person."

A version of this article appeared in the print edition of The Straits Times on February 02, 2019, with the headline 'US, China confident of reaching a trade deal before deadline'. Subscribe
Topics:
More
Whatsapp Linkedin FB Messenger Telegram Reddit WeChat Pinterest Print Purchase Article Copy permalink