WASHINGTON - The US Justice Department is probing whether fugitive Malaysian businessman Low Taek Jho was the source behind a US$100,000 (S$135,324.50) donation to a political fundraising committee for US President Donald Trump, The Wall Street Journal reported on Wednesday (March 13).

The donation was made in December 2017 to the Trump Victory committee, which aims to help Mr Trump be re-elected in 2020.

The donation was made by Mr Larry Davis, a US citizen who owns Hawaii-based investment company LNS Capital. The authorities are seeking to determine whether payments of US$1.5 million to LNS Capital seven months earlier by Low Taek Jho - who goes by the name Jho Low - financed the donation.

It is a federal offence for foreign individuals or companies to make direct or indirect donations to US politicians or fundraising committees, with the rules aimed at preventing foreign influence campaigns.

Low has been indicted in the US on three counts of conspiring to violate foreign anti-bribery laws and launder money. He also faces charges in Malaysia for his role in a scheme that pilfered billions of dollars from Malaysian state investment fund 1Malaysia Development Berhad (1MDB).

Low has denied wrongdoing and is in hiding. He is believed to be living in China, according to people familiar with the matter.

Low, through his attorney Mr Robin Rathmell, has denied the donation claims, saying they are false and without basis.

"Mr Low has never entered into any agreement and/or paid (or authorised payment of) any money to the entities referred to in the Wall Street Journal article as supposedly having made political donations," said Mr Rathmell in an emailed statement. "Indeed, Mr Low had never heard of LNS or Larry Davis until referenced by the Wall Street Journal. It is disappointing that the Wall Street Journal chose to ignore legal privilege and publish an email that was clearly sent in error."

After the Trump Victory joint financing committee received the money, more than US$60,000 of it was given to the Republican National Committee and US$5,400 was given directly to the campaign to re-elect Mr Trump, according to federal records. The remainder was distributed to state Republican parties and related campaigns.

A spokeswoman for the Republican National Committee said in a statement: "Trump Victory does not accept contributions from corporations or foreign nationals in accordance with the law. We vehemently deny any wrongdoing on the part of the RNC or Trump Campaign." 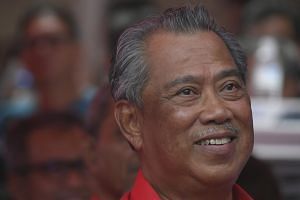 A foreign country yet to cooperate in extraditing fugitive businessman Jho Low in 1MDB case: Minister

Jho Low maintains innocence despite US charges over 1MDB

The Justice Department inquiry into the source of the donation is part of a broader investigation of Low's alleged efforts to persuade the US to drop its investigations into him and, separately, to extradite Mr Guo Wengui - a wealthy critic of Beijing - to China, where he faces allegations of corruption.

US officials believe Low is seeking to curry favour with Chinese officials while he continues to live in that country.

The Justice Department has sent multiple subpoenas to people allegedly connected to Low's efforts, seeking to unearth any connections they had to elected officials or people close to them.

The investigation into the donation by Mr Davis came out of the Justice Department's probe of 1MDB. Mr Davis wasn't previously a major political donor and LNS Capital has a low profile. Other than the US$1.5 million in transfers it received in 2017, little could be learnt about the company or its businesses from public records.

Before the December 2017 donation, Mr Davis made a US$100,000 donation to Trump Victory in October 2017. However, this was cancelled and the money refunded, according to public donor records. These appear to have been the only donations attempted by Mr Davis.

Mr Davis' wife, Ms Nickie Lum Davis, the co-owner of LNS Capital, is described in US court filings made public by the Justice Department in November as a "long-time political fundraiser" who has been helping Low in his efforts to persuade the Trump administration to drop its 1MDB investigation and extradite Mr Guo.

In the 1990s, Mr Davis' parents pleaded guilty to illegal campaign financing for Democrats during the Clinton era.

The November court documents were unsealed in the case of a former Justice Department employee, George Higginbotham, who pleaded guilty to secretly facilitating the movement of tens of millions of dollars by Low into the US in 2017 to lobby the Trump administration.

The court documents indicated that Ms Davis became acquainted with Low earlier in 2017. She had tapped a business contact, long-time Republican donor Elliott Broidy, whose wife Robin Rosenzweig owned a law firm that the Justice Department alleges received millions of dollars from a Hong Kong-based shell company controlled by Low.

That firm then passed on US$1.5 million to LNS Capital, the court documents say.

A lawyer for Mr Broidy and Ms Rosenzweig confirmed that they were hired by a friend of Low "to provide strategic advice as part of a broader team to Mr Low."

Neither Ms Davis nor a lawyer representing her in the case responded to requests from The Wall Street Journal for comment.

The Wall Street Journal reported that Low has also hired several lawyers connected to Mr Trump to advise him in his efforts, including Mr Chris Christie, a former New Jersey governor; Mr Marc Kasowitz, one of Mr Trump's lawyers; and Mr Bobby Burchfield, who advised Mr Trump on ethics matters. Representatives off all three lawyers have previously confirmed working for Low.

Low also met with Erik Prince, the brother of US Education Secretary Betsy DeVos, for lunch in Hong Kong in 2017 to discuss his case, according to people familiar with the matter.

There is no evidence that Low's efforts paid off, with the Justice Department indicting him in October on charges of money laundering and conspiracy to pay bribes under the Foreign Corrupt Practises Act. Moreover, Mr Guo remains in New York.

Ms Nickie Lum Davis' parents, Nora and Eugene Lum, and another daughter, Ms Trisha Lum, were star fundraisers in the Democratic Party in the early 1990s.

The US court documents in the Higginbotham case detailed e-mails between Trisha Lum and Nicki Lum Davis in which they discussed paying a portion of the money from Low to their parents, now in their 70s.