Some of the incidents appear to involve the same anti-stall system that has come up as a potential cause of a Lion Air crash in Indonesia last October, according to a review of a Federal Aviation Administration (FAA) incident database that lets pilots self-report trouble, said Politico.

Investigators have not said whether the same technology had emerged as a possible cause of the crash of an Ethiopian Airlines flight in Ethiopia on Sunday, with the loss of 157 lives, although both involved airliners that mysteriously plunged to the ground minutes after takeoff.

For one US incident in November 2018, reported Politico, a commercial airline pilot reported that during takeoff, the autopilot was engaged and "within two to three seconds the aircraft pitched nose down," in a manner steep enough to trigger the plane's warning system, which sounded "Don't sink, don't sink!"

After the autopilot was disengaged, the plane climbed as normal, according to the report in the FAA database.

The reports are submitted anonymously to help improve reporting of safety problems and so do not include any information about which airline was involved, Politico said.

In addition, though the reports have a spot to note what airport was involved, often pilots do not fill out that field. 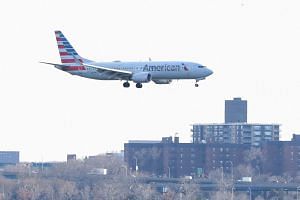 Airlines keep calm and carry on after Boeing jet groundings

The November incident occurred days or weeks after the October crash in Indonesia, which killed 189 people aboard a Boeing 737 Max 8 operated by Lion Air.

The report noted that before the plane involved in the November incident took off, the crew had "discussed the recent Max 8 (anti-stall) guidance" issued by the FAA and Boeing.

The Max 8 is at the centre of a growing global ban by more than 40 countries following the Ethiopia mishap, the second fatal crash of the model in less than five months.

In the US, however, the FAA and airlines continued to permit the planes to fly.

American Airlines and Southwest Airlines operate the 737 Max 8, and United Airlines flies a slightly larger version, the Max 9. All three carriers vouched for the safety of Max aircraft on Wednesday (March 13), reported the Associated Press.

In both the Ethiopian Airlines and Lion Air crashes, the plane descended sharply more than once as pilots wrestled with the controls before crashing.

In the case of Lion Air, preliminary facts suggest that the cause may have been the anti-stall system, which was designed to force the plane's nose down if it seemed to be rising steeply enough to risk a stall.

Pilots groups have complained that Boeing did too little to ensure that pilots or airlines were aware of the new anti-stall feature - or knew how to turn it off if it were malfunctioning or acting on faulty data.

In another report in the FAA database, a commercial airline pilot complained about how the FAA and Boeing were handling the problem, Politico said.

While the FAA had issued an emergency directive on Nov 7, 2018, to help pilots understand how to handle problems with the anti-stall technology, "it does nothing to address the systems issues," the pilot wrote. 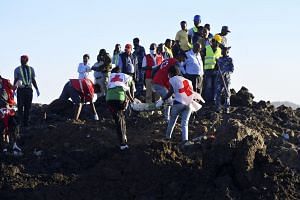 The pilot further noted that the flight manuals had yet to be updated with that information at that time.

"I think it is unconscionable that a manufacturer, the FAA, and the airlines would have pilots flying an airplane without adequately training, or even providing available resources and sufficient documentation to understand the highly complex systems that differentiate this aircraft from prior models," the pilot wrote.

"The fact that this airplane requires such jury rigging to fly is a red flag. Now we know the systems employed are error prone - even if the pilots aren't sure what those systems are, what redundancies are in place, and failure modes."

The pilot added: "I am left to wonder: what else don't I know? The Flight Manual is inadequate and almost criminally insufficient. All airlines that operate the Max must insist that Boeing incorporate ALL systems in their manuals."

In a separate report from October, a pilot complained that a Max 8's autothrottles - which command the plane to accelerate to a set speed within certain parameters - were not working properly even though the crew had engaged them.

The pilot noticed quickly and adjusted the thrust manually to continue to climb.

"Shortly afterwards I heard about the (other carrier) accident and am wondering if any other crews have experienced similar incidents with the autothrottle system on the Maz?" the pilot wrote in the report.

The pilot wrote that both he or she and the captain were new with this model plane and thus "not able to identify whether it was the aircraft or me that was in error."