WASHINGTON (REUTERS) - The inquiry into US President Donald Trump's dealings with Ukraine will enter a new phase shortly after Congress returns to Washington next week when lawmakers issue a report that could lead to impeachment charges against the president, the head of the committee leading the probe said on Monday (Nov 25).

US House of Representatives Intelligence Committee Chairman Adam Schiff said the panels involved in the impeachment probe would send a report to the House Judiciary Committee after lawmakers come back on Dec 3 from the US Thanksgiving holiday.

In a letter to members of Congress, Mr Schiff also said the report would include a catalogue of White House refusals to cooperate with the inquiry, and that the Trump administration's failure to cooperate could form the basis of a separate article of impeachment - or formal charge of obstruction of Congress - against the Republican president.

"A dozen witnesses followed President Trump's order to defy lawful subpoenas, and the White House, State Department, Department of Defense, Office of Management and Budget and Department of Energy have provided no documents in response to subpoenas," Mr Schiff wrote.

"In fact, the Committees did not receive a single document from any executive branch agencies pursuant to our subpoenas,"the Democratic lawmaker said.

Producing the report is a pre-requisite for a possible vote in the Democratic-led House on articles of impeachment against Mr Trump.

"The testimony and documents we have succeeded in acquiring reveal a fact pattern that is overwhelming, unchallenged, and damning," Mr Schiff said in the letter.

The intelligence panel last week wrapped up two weeks of public hearings, after several weeks of closed-door witness interviews, in the inquiry, setting the stage for the report lawmakers are working on now.

Mr Schiff said the probe was continuing, however, and investigators might hold further depositions or hearings. 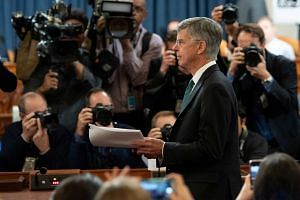 Trump impeachment more likely but removal from office still up in the air, say analysts

Impeachment process in the United States: High hurdles for removal of Trump

If the articles of impeachment are approved, the Senate, controlled by Republicans, would then hold a trial on whether to convict Mr Trump and remove him from office.

Republicans have shown little inclination toward removing Mr Trump, who is seeking re-election in 2020.

Mr Trump denies wrongdoing and he - and many of his fellow Republicans in Congress - have dismissed the inquiry as a sham, hoax or effort by Democrats to overturn the result of the 2016 US presidential election.

The inquiry centres on a July 25 phone call in which Mr Trump asked Ukrainian President Volodymyr Zelenskiy to investigate political rival Joe Biden and his son Hunter Biden as well as a discredited conspiracy theory promoted by Mr Trump that Ukraine, not Russia, interfered in the 2016 US presidential election.

Mr Hunter Biden had worked for a Ukrainian energy company.

Democrats have accused Mr Trump of abusing his power by withholding US$391 million (S$533.6 million) in security aid to put pressure on a vulnerable US ally to interfere in an American election by digging up dirt on his domestic political opponents.

Mr Joe Biden, a former US vice-president, is a leading contender for the Democratic nomination to face Mr Trump in the November 2020 election.

After receiving the report, the Judiciary Committee could conduct more proceedings, including hearings. The panel would draft any articles of impeachment against Mr Trump before they go to the full House for a vote.