WASHINGTON (BLOOMBERG) - Now that House Democrats have wrapped their last scheduled public hearing on Ukraine, they have to decide whether to schedule more or move to the next step towards impeaching President Donald Trump.

"In the coming days, Congress will determine what response is appropriate," House Intelligence Chairman Adam Schiff said on Thursday (Nov 21).

The Democrats head into a recess week trying to figure out if they can meet their tentative target of holding any impeachment vote before the end of the year.

Here are some of the important decisions ahead:

DECIDING WHETHER TO CALL MORE WITNESSES

"As I said to the President, if you have any information that is exculpatory, please bring it forward, because it seems that the facts are uncontested as to what happened."

Monday could represent a key decision point on that issue.

A US judge is expected to rule on whether former White House Counsel Don McGahn must answer questions from the House Judiciary Committee, which could become a precedent for resolving related disputes between congressional Democrats and the White House over other witnesses.

However that ruling goes, it isn't likely to head off months of court fights over subpoenas that could go all the way to the Supreme Court.

"We cannot be at the mercy of the courts," Ms Pelosi said.

"The courts are very important in all of this, those cases will continue. But I have never said we cannot proceed without the courts because that's a technique on the part of the administration - just keep ratcheting up to a higher court."

Pursuing additional witnesses would probably mean extending the Democrats' timeline. At this point, most members don't expect more public hearings but say that could change. The panel could also decide to hold more closed-door depositions.

The Trump administration has ordered federal agencies to defy subpoenas from the Intelligence Committee for a wide range of documents and e-mails.

On Wednesday, Mr Gordon Sondland, a Trump donor who serves as ambassador to the European Union, complained that his own testimony was hampered because he couldn't obtain records and notes he needed.

On Oct 23, a judge ordered the State Department to begin producing, within 30 days, documents related to the Trump administration's dealings with Ukraine, as part of a Freedom of Information Act request by American Oversight, an ethics watchdog. The committee will have to decide whether it's worth waiting for the end of those 30 days.

Some Democrats have questioned whether the department will fully comply with the order even after the deadline.

When the Intelligence Committee completes its phase of the probe, it will submit a report with recommendations to the House Judiciary Committee.

Democrats and officials familiar with the committee's activities say that drafting of the report will begin in earnest next week, with the aim of transmitting it to the Judiciary panel in early December. 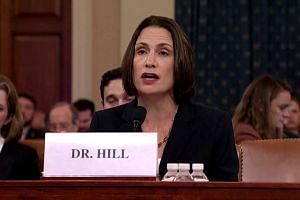 Judiciary chairman Jerrold Nadler has the option of holding his own hearings, where Mr Trump's representatives would have more ability to participate under the impeachment inquiry rules approved by the House.

The President's lawyers would be able to take part and would have an opportunity to call witnesses and cross-examine them.

Ms Pelosi has said the President would be welcome to testify in person or in writing, and Mr Trump said he would "strongly consider" the offer.

Mr Nadler will have to decide what to do with potential impeachment recommendations transmitted from committees that have been conducting investigations of Mr Trump on topics other than Ukraine.

Ms Pelosi has said she wants any impeachment effort to be tightly focused, but she's also noted that rules approved by the House don't set any limits on possible articles of impeachment.

Mr Nadler's committee would write up articles of impeachment and vote on sending them to the House floor.

TIMING OF A HOUSE VOTE

The Democrats' goal of any House impeachment vote by year-end is becoming challenging.

The House is now scheduled to be in session late into December, after passing a stop-gap spending Bill to fund the government through Dec 20. But that may still not allow enough time for the House to debate and vote on impeachment articles.

If a vote slips to next year, it would delay the Senate trial on whether to remove Mr Trump from office, which could take at least several weeks. That could push the entire process into the Democratic presidential primary season, a complication for the candidates, several of whom are US senators.

It would require a two-thirds vote in the Senate to remove Mr Trump. So far, no Senate Republicans have indicated they would vote to convict him, and if that held, it would allow an impeached president to remain in office, like president Bill Clinton before him.