WASHINGTON (BLOOMBERG) - The White House released a summary of an April call between Donald Trump and Ukrainian President Volodymyr Zelenskiy, part of an effort to demonstrate that the president's interactions with the country's government don't merit impeachment.

The new record documents a telephone conversation that took place immediately after Zelenskiy was elected president, and the White House said it shows that nothing irregular took place.

There is no mention of military assistance to Ukraine or investigations of Trump's political rivals, two subjects under scrutiny in the House impeachment inquiry currently unfolding in the Capitol.

Trump placed the call from Air Force One on April 21, returning from an Easter weekend trip to his Mar-a-Lago resort in Palm Beach, Florida.

He told the newly elected Ukrainian leader that he admired his country because of his experience owning and operating the Miss Universe pageant, according to the White House memorandum.

Zelenskiy invited Trump to his inauguration during the call.

"I'll look into that," Trump said.

Trump invited his Ukraine counterpart to the White House. "We'll have a lot of things to talk about, but we're with you all the way," Trump said. 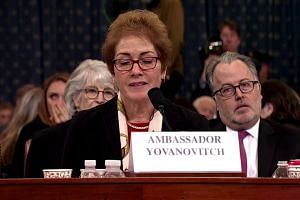 "Well, thank you for the invitation and look forward to the visit," Zelenskiy said. "The whole team and I are looking forward to that visit."

Testimony in the impeachment inquiry has shown that the Ukrainians considered it imperative to secure a White House meeting for Zelenskiy, an important show of support from a key ally for a new president establishing his government.

But one issue the House is examining is whether Trump later withheld that meeting as part of a scheme to pressure Zelenskiy into conducting investigations that would politically benefit the US president.

Trump wanted probes of discredited allegations that the Ukrainians interfered in the 2016 election and that former vice-president Joe Biden, one of Trump's 2020 presidential rivals, squelched a criminal probe into a company, Burisma Holdings, which employed Hunter Biden as a board member.

The US House inquiry focuses on whether Trump abused his power by trying to pressure the Ukrainian leader.

An earlier memorandum the White House released documenting a July 25 call with Zelenskiy showed that Trump asked him to "do us a favour" after Zelenskiy inquired about obtaining more US military equipment, including anti-tank missiles.

Trump then asked for investigations of Ukrainian election inteference and, later, of the Bidens and Burisma.

Trump has repeatedly said the July 25 call was "perfect" and has denied any wrongdoing. He said earlier this week he would release what he called a "transcript" of his April call with Zelenskiy.

While the memorandum of the July 25 call was marked classified and entered into a secure electronic storage system at the White House, the memo documenting the April call was not considered sensitive. The document is marked "unclassified."

The White House released the memorandum of the earlier call just as the House began its second public hearing in the impeachment inquiry.

Representative Devin Nunes, the senior Republican on the House Intelligence Committee, read aloud the entire memorandum of the April call, apparently to reinforce GOP arguments that Trump did nothing wrong.

White House Press Secretary Stephanie Grisham said Trump watched Nunes’ opening statement, “but the rest of the day he will be working hard for the American people.”

But the president less than an hour later tweeted attacks on the hearing’s witness, former ambassador to Ukraine Marie Yovanovitch.