WASHINGTON (AFP) - US President Donald Trump greeted three Americans released by North Korea at an air base near Washington early Thursday (May 10), underscoring a much needed diplomatic win and a stepping stone to a historic summit with Kim Jong Un.

Mr Trump and first lady Melania made the short helicopter ride from the White House to Joint Base Andrews to personally welcome Kim Hak Song, Tony Kim and Kim Dong Chul back to the United States, after their release from North Korea on Wednesday.

The President and his wife strode up the steps into the blue and white plane to greet them privately before coming out before TV cameras in the middle of the night.

Mr Trump praised Mr Kim for freeing the Americans ahead of the planned summit between the two leaders.

One of the former prisoners waved his arms from atop the steps, and another while down on the tarmac.

"It was understood that we would be able to get these three terrific people during the meeting and bring them home after the meeting," Mr Trump said. "He was nice in letting them go before the meeting. Frankly, we didn't think this was going to happen. And it did."

Remarking on the sudden shift in US relations with North Korea and the upcoming summit, Mr Trump said: "We're starting off on a new footing... he released the folks early. It's a big thing. Very important to me. 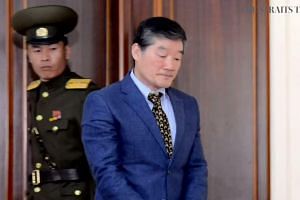 Who are the three US detainees held by North Korea?

He added: "A lot of very good things have happened."

The North Korean regime granted the three men "amnesty," a US official said, removing a major point of friction between Washington and Pyongyang and a potential obstacle to talks between the Cold War foes.

The men flew home with the new Secretary of State Mike Pompeo.

Two of the men, agricultural expert Kim Hak Song and former professor Tony Kim, were arrested in 2017, while Kim Dong Chul, a South Korea-born American businessman and pastor in his 60s, was sentenced to 10 years' hard labor in 2016.

The White House said all three men were able to walk unassisted onto a US Air Force plane that carried them and the Secretary of State out of North Korea.

A second plane, with more robust medical equipment, accompanied them.

"All indications are at this point that their health is as good as could be given that they've been held," Pompeo told reporters traveling with him.

The trio later released a statement of thanks conveyed via the State Department. "We would like to express our deep appreciation to the United States government, President Trump, Secretary Pompeo, and the people of the United States for bringing us home," they said.

"We thank God, and all our families and friends who prayed for us and for our return. God Bless America, the greatest nation in the world."

The family of Tony Kim also voiced gratitude to "all of those who have worked toward and contributed to his return home" - and specifically thanking Mr Trump for "engaging directly with North Korea."

Before the plane's arrival, Mr Trump described the men's release as "a gesture of goodwill."

The White House said Mr Trump spoke with his South Korean counterpart Moon Jae In on Wednesday about Mr Pompeo's visit to North Korea, and that the two presidents welcomed the release of the Americans and "expressed hope for joyful family reunions."

The development appears to pave the way for a much-anticipated summit between Mr Trump and North Korean leader Kim, scheduled to take place within weeks.

"It was absolutely imperative that the Trump Administration secure the release of the three Americans well before any summit," said Jean Lee, an analyst at the Wilson Center.

In his first reported comments on the summit, North Korean leader Kim Jong Un said his sit down with Trump "would be a historic meeting" and an "excellent first step" according to state media.

Trump says a time, date and location have been decided for his historic summit with Kim, although US officials say there is still some fine-tuning to be done.

The most likely location appears to be neutral Singapore.

The president told reporters the administration would announce the details "within three days" but revealed it would not be at the Demilitarized Zone that separates North and South Korea.

"I think that Chairman Kim is trying to set good conditions for the summit. I think we are having good conversations, productive conversations," Pompeo said. "We're planning on it will be a single day, but in the event that there is more to discuss, there'll be an opportunity for it to extend into the second day as well."

The meeting will discuss North Korea's nuclear and ballistic weapons program, which may soon give Pyongyang the capability of striking the continental United States. Since coming to office Trump has embarked on a campaign of "maximum pressure" on the North Korean regime.

A series of provocative North Korean missile tests have been met with US sanctions and a tougher Chinese stance on cross border trade. Officials in Washington believe the punitive economic measures have prompted fuel shortages in North Korea and increased tension inside the regime.

North Korea official Kim Yong Chul, who met Pompeo in Pyongyang, insisted the country's openness to talks was "not the result of sanctions that have been imposed from outside," but a change in regime focus.

"We have perfected our nuclear capability. It is our policy to concentrate all efforts into economic progress in country," he said.